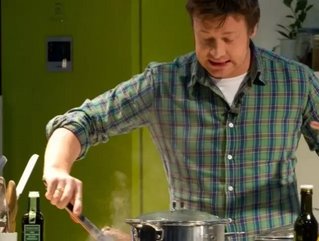 Jamie Oliver, celebrity chef credited with turning around British supermarket chain Sainsbury’s, is continuing his partnership with Woolworths through this holiday season. Oliver joined up with Woolworths after his Sainsbury tenure ended in 2011. The partnership with the Australian grocer has focused on “bringing better, healthier, affordable fresh food to life for everyday Australians, giving them the information and confidence to prepare great tasting fresh meals at home.”

Last year’s holiday advert featured Oliver bringing an Aussie Christmas BBQ to expats living in London. This year he was back in Oz, cooking with a party celebrating the holiday on the beach. Woolworths was still cementing Oliver as the face of their brand last year, and therefore spent a lot more time with Oliver in the advert. This season featured more of the food and the celebration than the holiday chef, with the company’s modified jingle playing throughout. See it below.

While the face of Sainsbury’s, Oliver was credited with shifting nine tonnes of nutmeg (previous two years’ in sales) after his “Try something new today” advert aired in 2005. The “feed your family for a fiver” campaign experienced similar success, with featured lines growing in sales by 200 percent.

When committing to Woolworths, Oliver brought his fresh food approach with him. His first act of business was making sure Woolworths was committed to selling meat from free range, organic chickens instead of caged. Many have seen Oliver’s participation with the market to be a move towards better quality produce and meat, hopefully leading Australians toward a healthy lifestyle in the kitchen. See his announcement about joining the brand.