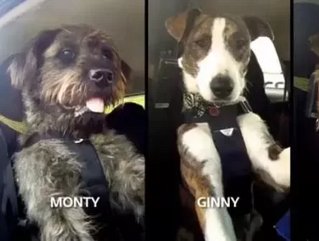 Three New Zealand dogs hopped in the driver’s seat and revved some engines to drive interest in finding their forever homes.

The New Zealand Society for the Prevention of Cruelty to Animals in Auckland selected beardie cross Porter, giant schnauzer cross Monty and beardie whippet cross Ginny as the “Driving Dogs” for an integrated advertising campaign with MINI.

These four-legged drivers underwent eight weeks of training to learn how to drive a modified MINI Countryman. On Monday, Porter steered successfully and became the first pooch to drive. Monty took the wheel in tow while the cameras rolled as the two dogs earned their licenses.

"It's all the dog doing it," trainer Mark Vette said. "He's started the key, put the paw on the brake to allow it to go into gear, put it into drive, paw on the steering wheel, accelerator on, and off he goes down the track."

The SPCA’s new spin on the term “adoption drive” successfully generated buzz for these talented dogs. The purpose of the campaign highlights how “intelligent, loving and loyal” shelter dogs are and demonstrates their trainability.

"It was a very clever, very cool and very crazy idea," said Jess Monk, Marlborough SPCA animal care manager. "We haven't had any adoptions so far this week, but it's great that people are talking about it and have it on their minds."

SPCA Auckland started the Adopt a Smart Dog promotion to encourage adoption for its 50 to 100 “smart dogs” in need of homes, according to its Facebook app page.

“They may be a mixed up motley bunch, but they’re all smart, and they’re all loveable. So please don’t forget about them.”

A team of professional trainers instructed Porter, Monty and Ginny on buckling up for safety and curbing any lead-paw tendencies. The SPCA urges people to not attempt to teach their own dogs how to drive, instead provide a safe, loving forever home.