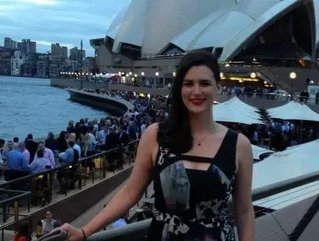 In an effort to attract under-30 travellers to Australia, Tourism Australia launched another “Best Jobs in the World” campaign with six positions available across the country. More than 40,000 video entries from candidates spanning the globe were entered into the contest, each hoping to become NSW’s Chief Funster, South Australia’s Wildlife Caretaker, Queensland’s Park Ranger, Western Australia’s Taste Master, the Northern Territory’s Outback Adventurer or Victoria’s Lifestyle Photographer for six months.

We spoke with Rebecca Morris, a top-25 US candidate for the Taste Master position who has big dreams for Western Australia’s culinary future.

Hi Rebecca, thanks for speaking with us! Tell us a little about yourself – and how you happened to end up in Australia earlier this year.

At 14, I had the chance to eat at Susur Lee's eponymous restaurant in Toronto. I had never heard of foods like uni or foie gras and here they were, beautifully presented on my plate.  My mind suddenly became very clear and I just thought, "I want to be a chef." Right away, I started working in restaurants in my hometown of Sarasota, Florida, and shirked conventional college for The Culinary Institute of America in Hyde Park, New York.

I soon learned that for people like myself who love to travel, cooking is great ways to make that happen. I jumped around every year or so, living in places like Toronto, Seattle, and Maine, and cooking at restaurants that had a great reputation for seasonality and farm-to-table cuisine.

As much as I value the experience those restaurants gave me, I never felt the pressure cooker environment required to be a top chef was a very good fit for me. Call me crazy, but I was looking for a change that would let me still work in food, without the tears of frustration after a busy dinner shift.

Enter Americas Test Kitchen, a publishing company based in Boston who produces the recipe driven magazine Cooks Illustrated. I knew this would be a good segue into food writing. I got hired and went on to work for them on several best selling cookbooks, two seasons of their award winning show, and I learned how to develop recipes in an approachable way for the home cook (a skill I think is missing in culinary schools). After two years, my partner, who is an academic, had an opportunity to spend a semester at the University of Sydney. There was no way I would pass up this chance – visiting Australia had been a dream of mine for a long time. So I sold my car, left my job at the Test Kitchen, and set out with him for the strange and beautiful land of Oz.

Nice choice. Why did you initially apply for a 'Best Job in the World' and how did you choose the 'Taste Master' position in WA?

I had seen a friend on Facebook "share" the advertisement, and I had this gut feeling that told me to just do it. I know I keep talking about my 'gut' instincts (go figure, its always about the stomach with me!), but I've found that whenever I listen to those feelings, they usually lead me to some amazing places…such as being in the top 25 for one of the best jobs in the world!

Choosing to apply for the taste master position was driven by my passion and experience in the food industry. I would be qualified for this job even if it weren't part of a worldwide competition, so it was a no brainer in my head. And as amazing as the jobs like 'wildlife caretaker' and 'park ranger' sound, my heart will always be where the food is.

If you are selected, how will you help promote WA and its food/wine offerings?

After living in Sydney, I have seen first hand just how right those slogans are: There really is nothing like Australia! And Western Australia, though I haven't been yet, is the kind of dining destination I'd like to sink my teeth into. The food scene just keeps getting better, with celebrity chefs I respect moving into Perth like Jamie Oliver, and well established restaurants like Amuse singing the praises of the quality fish, meat, and produce in the state. There's no better recommendation for a region than the chefs that work there; they know where all the good food is!

But I also want people to know that there's so much more to WA than the restaurants, because if they learn the whole story, they are going to have to see it for themselves. Fantastic restaurants get to be that way in part because of the region they are in and the producers who deliver it freshly to their back door. In addition to telling the individual stories that make up the diverse food landscape of WA, I will also document all of the culinary adventures you can have. For instance, I had no idea that I could go foraging in Manjimup, and find truffles the size of my fist! Or that after winery hopping through the Swan Valley trail, I could drive 15 minutes and watch the sun set on Burns Beach. Talk about extraordinary.

Which experiences, personal qualities and strengths will you bring to the position and how will they set you apart from the other candidates?

I want to give my readers a taste of what they can find in WA. I plan to do that by getting my hands wet deep sea fishing, staining my clothes making wine with the talented vintners in Margaret River, and sharing those experiences (to only name a couple) with the rest of the world through blogging and recipe writing. I've taken wine courses through my culinary school, so not only can I sip happily on a Vasse Felix Classic Dry Red, I'll be able to tell you about why this blend of varietals work so well together and the unique qualities the terroir in Australia has to facilitate a really successful vintage.

I also have a great idea for a cookbook that I would write while in WA. I'm working on a proposal, and I am shopping my idea around to garner support for the book. I'm really excited about this and I think the book idea has a lot of potential.

What do you hope to gain from this experience, both personally and professionally?

I hope to develop relationships while I'm there with the people who will grow my food, bake my bread, and culture my cheese. Then, I want to spread the word about how amazing those people and these places I visit are. I want WA to become the next Napa Valley, of sorts: a place people will put on their bucket list for the food and wine, and when they visit end up experiencing so much more than they imagined. Personally and professionally are one in the same with me. I love what I do; I always have. And I have enjoyed every moment of this competition that has let me share my passion for Australian food, wine, and way of life.