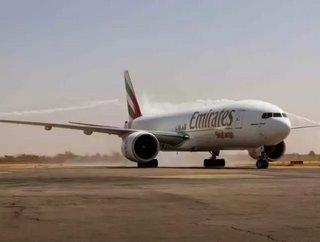 Emirates has underscored its commitment to China with the launch of a new service from Dubai to Yinchuan and Zhengzhou, two of the fastest growing cities in Midwest China. This service expands Emirates’ destination offering on the mainland to five, including Beijing, Shanghai, and Guangzhou.

Chairman and Chief Executive of Emirates, Sheikh Ahmed bin Saeed Al Maktoum, was on board the inaugural flight with a number of senior executives of the airline. They were joined by a VIP delegation that included prominent business leaders in the UAE.

The flight was operated by a crew of 14, which included Chinese cabin crew. The aircraft was greeted in Yinchuan and Zhengzhou with a traditional water cannon salute upon arrival.

Sheikh Ahmed said: “Emirates is very pleased to start services to Yinchuan and Zhengzhou. This new route will provide citizens in and near both cities with convenient and fast connections to destinations in the Middle East, Africa and Europe via Dubai. We are confident the new air transport links will also help boost trade and tourism flows to the growing central and western parts of China where these cities are located. We would like to thank the government and airport authorities for their warm welcome and support in the launch of our flights, and we look forward to serving our customers on the route.”

As China looks to connect with the Western world through the ‘Belt and Road Initiative’, Dubai is well-positioned to support China in achieving the mutual benefits that will come from this initiative, including deeper levels of cooperation and exchange. Located at the crossroads of East and West, Dubai is the largest import-export hub in the Middle East, connecting the world through its strong governance, extensive trade networks and global connectivity links.

Emirates has been a large part of this development, being the first airline to establish non-stop connectivity between the Middle East and mainland China, first with freighter operations to Shanghai in 2002, followed by passenger services in 2004. Currently serving 54 cities in 30 out of the 65 countries identified as part of the Belt and Road Initiative, Emirates is uniquely positioned to support China in advancing its trade and investment links with these countries.

Using a Boeing 777-200LR aircraft and offering more choice, flexibility, convenience and greater connectivity to and from China, Emirates will provide the highest level of service. The airline’s Private Suites for First Class travellers on the Yinchuan and Zhengzhou route will be the first of its kind in these two markets.

From a cargo perspective, the 777-200LR offers 14 tonnes of cargo capacity in the bellyhold. Popular commodities expected to be transported on these services include electronics, such as mobile phones from Zhengzhou, and agricultural products such as goji berries and cashmere from Yinchuan.