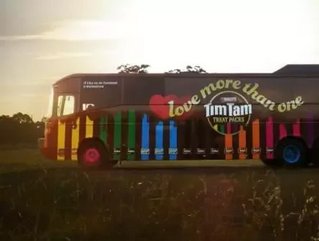 “Wouldn’t the world be a better place if we could love more than one?”

Arnott’s encourages sharing the love this Valentine’s Day with its “Love More Than One” travelling campaign to launch its Tim Tam Treat Packs. About 200,000 Tim Tams in eight flavours will be given away in the next three weeks.

The Tim Tam bus departed from Melbourne to Warrnambool on Wednesday to start its journey across regional Australia. To increase interaction with the campaign, Tim Tam Facebook fans may vote to determine the route through Victoria, South Australia and New South Wales. Along with the much-loved Tim Tams, the tour includes sampling, interactive games and activations.

“Tim Tam is the only chocolate biscuit that stirs emotion in Australians that’s beyond reason,” said Susanna Polycarpou, Armott's brand director. “We’re celebrating the magical love of Tim Tam by creating a unique experience for our fans to enjoy. We would love Tim Tam fans to visit us as we travel around the country and join in the fun by helping to share the Tim Tam love.”

About 35 million packs of Tim Tams are sold each year with one in two homes containing a packet in Australia, according to the Arnott's website. The eight varieties of Tim Tam Treat Packs are Original, Double Choc Vanilla, Choc Orange, White, Turkish Delight, Honeycomb, Dark Chocolate Mint and Dark Chocolate Rum & Raisin.

Valentine’s Day marks the airdate for a 30-second TV commercial promoting the tour during high-rating shows, including The Voice, Downtown Abbey and Parade’s End. Upon the completion of the tour, a 15-second spot will showcase the eight varieties, encouraging fans to try the assortment. As the TVC states, “Who says you can have just one true love?”

Enjoy the journey and find all of your true loves with Tim Tam. Happy Valentine’s Day, Oz.