Virgin Hyperloop One to operate between Pune and Mumbai's new airport 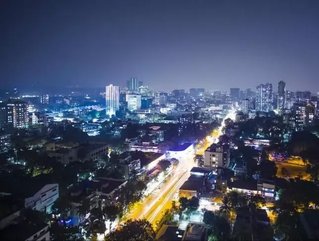 Virgin Hyperloop One, the high-speed transport system backed by Richard Branson is set to build a hyperloop track in India.

The transport system is set to connect the city of Pune with Mumbai: in particular, the new Navi Mumbai International Airport which finally began construction this week.

The journey between the two is set to be reduced by three hours to just 25 minutes by Hyperloop.

Bosch India to hire up to 10,000 engineers to work on AI and IoT

A preliminary agreement was signed by Branson in Mumbai on Monday for a broad hyperloop framework. A demonstration track is set to be completed within three years and construction of the full route from Pune to Mumbai will be completed in five to seven years.

The airport itself, located 22 miles southeast of Mumbai’s existing airport, is set to be partially operational by December 2019, with one runway serving around 10mn passengers, while upon completion the airport will have the capacity for about 60mn passengers annually.

In a recent study, Virgin Hyperloop One stated the new route could result in $55bn worth of socioeconomic benefits over 30 years.

Hyperloop One has so far reached speeds of 240mph in testing. The transport system uses magnetic levitation in low pressure tubes for high speed transportation. It is powered by electricity, and as such it is thought that the Pune-Mumbai track could reduce greenhouse gas emissions by around 15,000 tonnes per year, when the reduction in cars travelling the route is considered.

The new route would connect up to 26mn people, and Branson has stated: “I believe Virgin Hyperloop One could have the same impact upon India in the 21st century as trains in the 20th century. The Pune-Mumbai route is an ideal first corridor as part of a national hyperloop network.”

Laying the foundation stone of the new airport this week, Indian Prime Minister Narendra Modi stated: “Globalisation is the reality of our times. To keep pace with globalisation, we need top-quality infrastructure.”