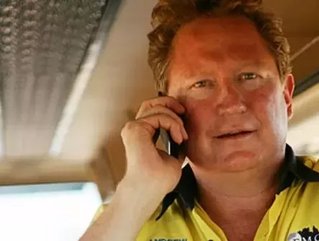 Georgina Rinehart: Not only is she Australia’s richest woman, but she’s Australia richest person. She’s also poised to become the richest person on the planet should her success continue. The notoriously reclusive mining heiress has a net worth of $9 billion, mostly from Hancock Prospecting that she inherited from her father. Not one to rest on her laurels, Gina has built up the mining company up quite considerably over the last 20 years. Rinehart’s fortune is expanding even greater thanks to high iron ore prices and increased exports to China.

Andrew Forrest: As the founder and former CEO of Fortescue, Australia’s third largest iron ore exporter, 49-year-old Andrew Forrest is worth $6.7 billion. Known also as “Twiggy,” Forrest started Fortescue in 2003 to create the Pilbara Iron Ore and Infrastructure Project. It’s since grown to possess three times the tenements of its nearest rival in the Pilbara. Forrest’s net worth increased by $500 million in January 2011 when Fortescue reported a 9 per cent surge in iron ore production in the December quarter.

Frank Lowy: Westfield founder and former chairman Frank Lowy has gone from being the owner of a Sydney sandwich shop to the man who modernized shopping malls. The self-made 80-year-old Lowy just recently stepped down from his post as chairman of Westfield, after establishing a $33 billion portfolio of 119 malls in Australia, New Zealand, the UK and US. He retires with a cool net worth of $4.4 billion.


James Packer: At 43, Packer is the youngest Australian billionaire on our list with a $4.4 billion net worth. He inherited most of his fortune from his media tycoon dad, Kerry Packer, but James is no slouch when it comes to running an empire. Showing a keen interest in gaming, Packer went on to acquire a number of casinos, including Melbourne’s Crown Casino, the largest in the nation. Packer now owns a 17.88 per cent stake in Network Ten, showing he’s still interested in following in dad’s footsteps.

John Gandel: Real estate mogul John Gandel is equally known for his property development knowhow as he is for his isolation from the media. He’s made most of his billions through inheritance from his Polish-immigrant parents, but has invested much of it into developing shopping centres and claiming stakes in trusts. Forbes has pinned Gandel’s net worth at $3.3 billion. Not too shabby for this reclusive art and education enthusiast.

Harry Triguboff: Like Gandel and Lowy, Triguboff has Eastern European and Jewish roots and has made his fortune by building in Australia. Now, the 77-year-old is the chairman and managing director of Meriton Apartments, which has built almost 50,000 residential dwellings since 1963. That makes Triguboff Australia’s biggest residential property developer and the holder of a $3.3 billion fortune.

Kerr Neilson: Neilson is the first one on our list to make his money from pure financial investments. The self-made billionaire established Platinum Asset Management  in 1993 but cashed out part of his stake in 2007. The 57 per cent of Platinum he does still hold has contributed to his $2.4 billion net worth. Neilson has made a name for himself for his knack of selecting high-performing stocks from solid companies.

David Hains: This 80-year-old has earned his $2 billion through a diversified portfolio of investments through his Portland House Group. Most notable is the funds management division, but Portland also has investments in retail, manufacturing, engineering and property. Hains stays out of the spotlight, but he’s known to be an avid horse breeder.

Kerry Stokes: Stokes is at the helm of two very different businesses—Seven Media Group, the nation’s top-rated TV network, and Westpac, the largest distributor of Caterpillar equipment in Australia and China. Stokes negotiated the purchase of Seven West Media by West Australian Newspapers for $4.1 billion in order to reduce debt. He’s also benefitting from China’s expansion, selling record numbers of earthmoving and construction equipment. His net worth is estimated at $2 billion.

Lindsay Fox: He’s the only Australian who’s in the business of transport and logistics that makes the list. The self-made trucker has grown his Linfox business from one truck at 19-years-old to a portfolio of industrial products, including regional airports. During the GFC,  Linfox profited from the movement of consumer goods, alcohol and mining products. The 74-year-old Fox, whose net worth is $1.7 billion, is keen on expanding even farther into China, Thailand, Indonesia and India.