Into the Storm: Lessons Learned from the Midnight Rambler 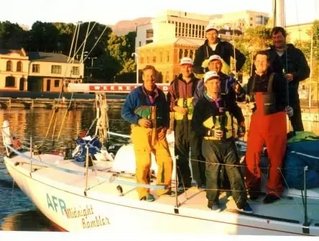 Your book is written in miraculous detail and illustrates the personal accounts of so many Hobart participants. How long did the research process take and what did it entail?

Although it's hard for me to believe, the process of writing the book started in 2003 so the book has been some nine years in the making!

I first corresponded with Ed Psaltis, skipper of the AFR Midnight Rambler, and subsequently visited Australia a number of times to meet with members of the boat's crew. I interviewed each member of the team for a documentary, and I got to know a number of sailors from other boats. I also interviewed one of the rescuers, Kristy McAlister, who saved the lives of two sailors in the1998 race.

In the process, I was truly impressed by the extraordinary leadership and teamwork that I found on the Rambler, and other boats as well. I was also inspired by my conversations with John Walker, who at age 86 became the oldest skipper ever to do the Sydney to Hobart Race.

My co-author, Jillian Murphy, and I interviewed a number of other extraordinary sailors: Adrienne Callahan, navigator of Wild Oats, who holds five world speed records and is a veteran of 19 Hobarts; Roger Hickman ("Hicko"), skipper of Wild Rose who won the 1993 race and many other sailing trophies; and Neville Crichton, owner and skipper of the "supermaxi" Alfa Romeo. All these "sailing greats" took the time to share their insights and expertise.

Although I learned a lot by listening and talking, I also realized that there is no substitute for hands-on experience. I decided to do the race myself, and in 2006 sailed to Hobart with Peter Goldsworthy and his crew. It was a great experience, and it gave me the opportunity to do more field research -- some of which involved investigating the celebration rituals of sailors at the Shipwrights Arms Pub.

At the end of all this research came the inevitable final step: writing the book. With the able assistance of Jillian Murphy, I employed my top secret writing formula: "A. Sit down, B. Write, and C. Edit!"

What came first: the desire to pen a book about the fundamentals of teamwork and leadership, or was the book initially inspired by the Midnight Ramblers and then eventually followed by a synopsis of their learned lessons?

Writing about The Ramblers was part of my own journey to find ways of helping leaders and teams deal with daunting challenges. I use stories of adventure and survival to communicate critical strategies that can be used by people in any challenging situation.

The approach began when I was teaching at Yale University, and I began thinking about my voice in the world of leadership and teamwork. I had my own experience with survival in the U.S. Marine Corps, but I believe that success with any significant team challenge has the same underlying ingredients. So I began researching stories of groups that had faced the limits of human endurance, a place I call The Edge.

My previous book focused on the role of the leader, and I highlighted the story of Ernest Shackleton's expedition to Antarctica (Leading at The Edge: Leadership Lessons from the Extraordinary Saga of Shackleton's Antarctic Expedition). I believe the book -- which has just been published as a second edition -- has some important messages about leadership. But I had been thinking about a book that showcased the role of teamwork. I was particularly interested in teams that displayed what might be characterized as distributed leadership.

When I heard about the story of the Midnight Rambler, I decided to investigate further, and my inquiry eventually turned into my latest book. I believe that Into the Storm illustrates a set of strategies that are different from Leading at The Edge, but also very complementary.

Who is your desired readership? Who do you hope to educate and inspire?

My goal in writing the book was to craft a message that would resonate with anyone in a team faced with big challenges, or trying to achieve the highest level of performance. I believe the lessons will be useful across a broad range of settings, including business organizations, non-profits, and government.

My son, who is a minister, has also found them helpful in his church work. And I believe that many of the concepts apply in settings not typically thought of as teams. For example, from my perspective a family is very much a team.

How has writing this book impacted your approach to new challenges, of both a professional and personal nature?

The process of writing the book caused me to look at the very essence of teamwork, and to challenge some of my basic assumptions. In the beginning, I think I had an unconscious belief that any group of people who had good intentions and employed the right strategies could become a great team. I now see things differently.

While it is true that any team can significantly improve its performance, it takes more than good will and teamwork principles to create a great team. As I point out in the book, team members have to have a threshold level competence, and be willing to do the hard work of practice and preparation. They have to get their egos out of the way and focus on building a rock star team. And they have to admit their limitations and be in roles that play to their strengths.

These lenses have helped me understand how to create what I believe is a rock star team in my own organization. And this perspective has helped me in my role as a consultant and coach to organizations facing their metaphorical equivalent of the Sydney to Hobart Race.

I understand you embarked on the 2006 Hobart race yourself. Two questions: what inspired your nickname 'Perk', and have you continued sailing since then?

On my first visit to Australia, I noticed that nicknames were much more common than in the States. And the creativity that went into some of the terms also made me smile. Of course, John often became "Johno," and Gordon, "Gordo." But when I found myself sailing with an Englishman named "Frenchy," I did a double take!

My father had always been called "Perk," and it always felt like that nickname belonged to my dad. Nonetheless, I put "Perk" on my sailing gear, and was often called that on the race -- especially by James Craddock, aka "Jungle." I still have fond memories of Perk and Jungle on the rail sailing into Hobart!

I've owned a boat for a number of years and sailed Invictus until recently. When I started the book I decided, somewhat ironically, that the boat should find another owner as I didn't have time for sailing. I may buy another when I've finished my book tour, though, and I still have the dinghy -- which my granddaughters named "Victus"

How has the 1998 Sydney to Hobart impacted the race, and the sport, today?

I believe there is no question that lessons learned in 1998 have been incorporated into the sport. The Cruising Yacht Club conducted a careful investigation, and a number of specific measures were developed through the NSW coronial inquest.

Prior to the race I participated in safety and survival training, and learned how to climb into the "strop" of a rescue helicopter and deal with an overturned life raft. I believe it is important to note, that -- compared with most challenging outdoor activities -- sailing is still an extremely safe sport. And the careful preparation done by the Ramblers and other experienced sailors is an important safeguard that begins well before the start of the race.

Any plans to write a follow-up book?

I'm now developing a keynote presentation to complement Into the Storm, and I don't have any immediate plans. I'm sure a new idea will surface, but for now I'm focused on sharing my Teamwork at The Edge message.

I should add that any decisions about a new book will be carefully discussed with my wife, Susan. Although writing the book was challenging, I know that being the supportive spouse of a writer with a deadline was "no picnic" for her either!

Author Bio
Dennis N.T. Perkins, author of Into the Storm: Lessons in Teamwork from the Treacherous Sydney to Hobart Ocean Race, is the author of Leading at The Edge and CEO of Syncretics Group, a consulting firm dedicated to helping leaders and teams thrive under conditions of adversity, uncertainty, and change. A graduate of the United States Naval Academy at Annapolis, he successfully completed his first Sydney Hobart Race in 2006. He lives in Madison, CT.