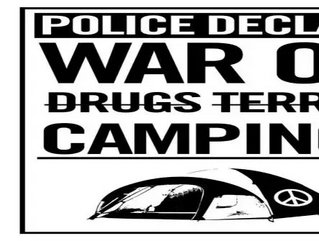 Fourteen people arrested in the 23 October Occupy Sydney raid are in the Downing Centre Local Court today to face police assault and resisting arrest, but they’re not going at it alone: protestors equipped with tents and sleeping bags have rallied their support just outside the front doors.

“The protesters plan to launch a High Court challenge to the October 23 raid and up to 30 people continue to occupy Martin Place every night,” Occupy Sydney spokesman Josh Lees told The Australian today.

“We're here to defend (those facing charges) but also to make the broader point that people should have the right to protest."

According to the Occupy movement’s Sydney website, there have been 59 arrests from police in attempt to end protestors’ occupation of Martin Place. A media release from the legal support group yesterday forewarned authorities of their planned presence, and a Facebook invite to the ‘Court Solidarity’ event shows at least 121 supporters plan to show up.

Over the weekend, Occupy Melbourne hosted three discussions between academics, activists and other experts to kick off an ongoing series of sessions addressing how the Australian economy, society and politics can be improved. Known as the "Melbourne Free University," sessions will run through the summer on Tuesday evenings from 7-8:30 p.m. at City Square.

In Perth, Occupy demonstrators joined a public rally on 3 December to end uranium exports to India and encourage local job creation through renewable energy efforts, but Prime Minister Julia Gillard overturned the ban yesterday after a close 206-185 vote in Parliament.