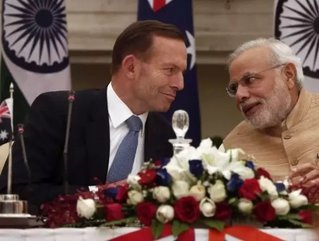 An unlikely superstar, Indian Prime Minister Narendra Modi spoke both at Sydney’s Olympic Park and Australia’s Parliament today. Olympic Park held a sell-out crowd, mostly of Australia’s Indian community, intent on hearing Modi’s speech about the importance of democracy and the continuing efforts to fix India’s crippling poverty problems. His second speech of the day at parliament marked the first time in 28 years an Indian leader has given a public address to Australia’s federal politicians.

In the wake of Australia’s signed free trade agreement with China, Modi used his time on the parliament floor to suggest that both countries would benefit from working together.

"Australia has immense opportunities to participate in India's progress," Modi said "In turn, India will be the answer to your search for new economic opportunities and your desires to diversify your global economic engagement."

Australia’s increased economic presence in the Asia Pacific and Indian Ocean region was revered by Modi, who believes cooperation of the surrounding countries is key to the region’s future.

“There was a time when many of us thought Australia was a distant land,” Modi said. “Today, the world sees Australia to be at the heart of the Asia-Pacific and the Indian Ocean region [...] I see Australia as a major partner in every area of our national priority.”

With India’s enormous population, Modi addressed his country’s interest in Australia’s solution to energy, including clean coal, gas, renewable energy and uranium. These would be commodities India would be interested in importing from Australia. Security was another hot topic, believing that Australia’s continued effort to secure free trade agreements in the region would mean for safer waters and security cooperation between nations.