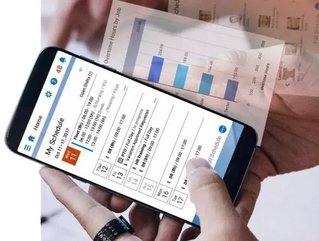 “My 19 years at Kronos have passed so quickly – I still bounce into the office every day.” Kronos’ ANZ/SEA Managing Director Peter Harte certainly hasn’t lost enthusiasm for his job, and has been instrumental in helping other companies retain such a motivated workforce.

Global leader Kronos provides multiplatform human capital and workforce management software across a range of industries in 100 countries, employing more than 5,000 people around the world. The US$1.2bn plus company’s technology streamlines business processes so managers can focus on running the business.

Harte is responsible for the overall management and direction of sales and marketing in Australia and New Zealand, and is passionate about driving a strong, positive staff culture. Kronos recently came 17th in the 100 Best Places to Work in Australia, and Harte says it’s aiming for number 10 this year.

“The 96% engagement rate we scored is a pretty cool number,” he reveals. “What sets Kronos apart from our competitors is our culture, driven by our CEO, Aron J. Ain. He’s infectious, and people look forward to coming to work because it's such a fun environment – and you use different things to motivate different people.”

Kronos puts 10% of its revenue into R&D each year, ensuring the cloud-based technology, used by its 650 Australian clients, such as Myer, Mater Hospital, PFD and Bupa, is leading edge. The company’s  cloud-based human capital and workforce management solutions allows businesses of all sizes to gain a competitive advantage with consistent, real-time employee data. It provides a single-source access across time and attendance, rostering, HR and more, allowing the user to make better, more informed decisions. “Technology is so powerful in keeping the workforce motivated,” Harte explains.

Typically, these solutions were adopted by CFOs and CEOs as a way to cut costs. In today's environment, executive teams and boards are interested in how the solutions help their workforce become more productive. In 2005, 20% of Kronos revenue came from Software as a Service (SaaS) products. By the end of 2018 Kronos aims to raise that to 100%.

“In the last year, 90% of organisations now want to buy our solutions on a monthly subscription,” adds Harte. “It certainly makes things easier for the customer – it's very flexible and easier to maintain when internal IT resources aren’t burdened with maintaining an on-premise solution. Customers are seeing the benefits of cloud and investing in it.

Kronos works with some of the emergency services, including police forces and airports in the United States. “The key thing about scheduling staff in a high security area is ensuring very quick rotation,” he says. “It keeps people fresh, even when there's a bigger influx of passengers coming in, so the workers don't get stale in what they do. Here and in America, we do ‘what if?’ scenarios. Not just with passengers coming through, but you've got to look at ‘what if’ a disaster strikes and consider what kind of people you will need to assist. In an emergency, you need a piece of software to proactively manage the right people and skills to handle the situation.”

The arrival of Amazon is a threat to many major retail outlets in Australia. The e-commerce giant has a nine-storey office in Sydney and is locating its new distribution centre in Melbourne. Customers in Australia can already order products from overseas, but once the company has a base in the country, shipping times and costs will be greatly reduced, posing an even bigger threat to traditional retailers.

Dubbed the “Amazon Juggernaut” by Roy Morgan CEO Michele Levine, Amazon’s arrival threatens Australia’s $300bn retail sector. According to Roy Morgan, 54% of Australians over the age of 14 bought a product online over three months in 2017, while 25% of Australians shopped online for electronics and appliances. Levine told Business Chief: “that puts Australia right in the firing line”.

Can Kronos withstand what Amazon will bring to the nation? Harte reveals some retailers understand that happy staff and culture equals a better customer outcome. “You've got those who are struggling with their balance sheets worrying about Amazon, and figuring out, ‘okay, how do we get the best out of our people?’” He says it's easy to sense the culture from a retail outlet the moment you walk in, explaining: “If a staff member greets you smiling, and says ‘hello’, compared to walking into a rival, where everyone looks a little bit scared, with their shoulders down, it's evident which company is going to be more successful.”

Harte says the two industries where people make up an average of 60 % of its operational costs are retail and healthcare, the latter ranging from hospitals, to medical centres, to aged care. “If you look at healthcare, everyone's getting older and living longer,” he says. “The healthcare sector struggles to ensure the anticipated patient demand is going to be fulfilled on a daily basis and that they have the right people with the right skills. We’ve found that especially in the nursing sector, a lot of people left nursing because the companies weren't flexible enough around their scheduling. The great thing is, technology now allows people to do that. So, we're getting more women and nurses back into the workforce.”

Kronos insists business leaders must consider what kind of technology needs to be put in place to keep the talent highly engaged, and it invests millions into making it easy for employees to interact with the employers. “Everybody now expects information instantaneously delivered to them on their smartphone,” adds Harte. “I was listening to a millennial recently who was going for an interview at a particular retailer and was aghast he couldn’t access the roster by his phone, saying the company was ‘so antiquated’. It puts the ball in the opposite court as it used to be the employers that would have the luxury of picking two people to hire out of 100 people. Now, younger generations of employees won't work for a business unless it has the tools they expect, which is where we come in.”

Harte says one area businesses need to nail from the start is tailoring their technology and HR on-boarding to make it appealing to a multi-generational workforce. “People are attracted to roles at companies when they get sold the dream,” he explains. “But there’s a massive difference between orientation versus on-boarding, and what lets everybody down is that classic HR on-boarding. We’ve all been there. You're excited. You tell your friends you got the job, then as soon as you walk in … you go nowhere. Maybe watch some uninspiring videos. Businesses have to understand how to motivate and talk to each generation because they expect different things. If you get your on-boarding correct, you've got a greater chance to retain staff.”

Most of Kronos’ partnership engagements last for a lifetime because the workforce is always changing in not just the people, but also the demand. Harte says it's rewarding seeing some of those organisations go from small companies to powerhouses within their industries, and has four tips for longevity. “The first key thing for Australian businesses is to make sure they're compliant and make sure people are paid properly,” he says. “Trust your employees and look after those people who rely on that fortnightly pay, or face severe brand damage. The second thing is, look at your current staff and think, ‘are they in line with my company strategy, and if not, how can I ensure they are?' The third thing is, embrace technology. People use mobile devices for almost everything. I text my daughter to come downstairs for dinner now! Embrace technology and make sure you use it in a way that five different generations want to use it. The last and final thing is, bring fun into the workplace. There's nothing wrong with breaking out into song in the middle of the office, just because you feel like a singsong.”