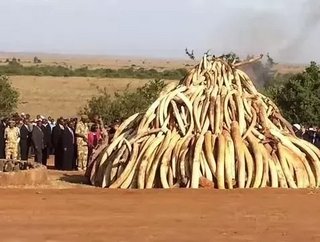 With the largest haul of ivory obtained by Hong Kong authorities this week, the spotlight is again placed on this banned trade, which continues to thrive in areas such as mainland China and throughout Asia.

The ivory ban has been banned worldwide, especially within China, Singapore and the US. However, the latest haul, encompassing over 7,000kg of ivory tusks, valued at approximately $12.8 million, according to Reuters, highlights the prevalence of this ongoing trade. With the haul originating from Malaysia, it is estimated that over 700 elephants were killed or severely injured in the process.

In 1979 – 1989 alone, half of Africa’s elephants were decimated as a result of the ivory trade, leading to a worldwide outcry surrounding the practice. Consequently, Kenya burned its ivory hoards and has since remained a key protector of elephants, burning nearly five tonnes of seized ivory in 2011, alongside Gabon, the USA and the Philippines. The Convention on International Trade in Endangered Species has also worked to ban all international trade regarding ivory, leading to markets crashing and closing at this time.

With elephant numbers therefore rising within the next 10 years, the trade also grown in prominence against an increased demand. In 2002, Africa sold over 60 tonnes of past ivory to China and Japan, also influencing a surge in demand.  Save the Elephants reported that demand for ivory is linked with the lucrative prices of ivory products, with over 100,000 elephants killed between 2010-2012.

Elephants especially are therefore yet again becoming endangered in Asia, with under 50,000 remaining since 2000, with trading routes within Myanmar still existing, although under radar.

Not only content with ivory, there is also a growing demand within China for elephant and other animal ivory parts, which is in line with the growing influence of Traditional Chinese Medicine, alongside areas such as ivory jewellery, which can be sold for inflated prices. There is still much to be done to outlaw this trade.