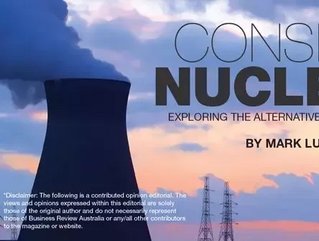 Written by Mark Ludwig,  P.E., MBA: President and CEO of Crosshair Energy (NYSE MKT: CXZ, TSX: CXX), a uranium exploration company with uranium projects in the U.S. and Canada.
Disclaimer: The following is a contributed opinion editorial. The views and opinions expressed within this editorial are solely those of the original author and do not necessarily represent those of Business Review Australia or any/all other contributors to the magazine or website.

On 1 July, Australia’s race toward a “Clean Energy Future” began when the first phase of carbon pricing officially commenced under the government’s Clean Energy Legislation.

But consider that both Europe and the U.S. have invested heavily through government subsidies, loan guarantees, and private investment in the search for new technologies and new sources of electricity that don’t load the atmosphere with carbon dioxide but will deliver the power required to run a city. Their search has failed—miserably.

In its wake lies a minefield of corporate bankruptcies, billions upon billions of investor and tax dollars swirling down the drain, and the realisation by governments and some major energy companies that they can no longer afford to finance technologies that simply don’t work. China announced it will stop further expansion of solar and wind power. Germany, Great Britain, Italy and France have cut their solar subsidies. BP has officially abandoned solar energy development after four decades of heavy investment. Range Fuels, Evergreen Solar, Solyndra, Beacon Power, Solar Trust and Abound Solar have landed atop a growing list of carbon-free hopefuls whose green energy technologies crashed when thrust up against real world energy economics.

Why has the search for clean energy failed? Because the Americans and Europeans have been investing in a search for something that doesn’t exist. In the frenzy to invest in all things green, an important fact has gone ignored: the wind and the sun are not reliable sources of energy. There are times when solar is on (sunny days), and times when it’s off (every night/snow days/overcast).

The grid doesn’t work like that and neither does a modern industrial society. Producing economies depend on the always-on, uninterrupted baseload electricity that is generated by large power plants that burn coal, oil and natural gas, and by hydroelectric and nuclear power plants. You can’t get baseload power from the sun or wind. Without an assured supply of low-priced baseload electricity, a developing economy will never move beyond third world status and mature economies stand to lose their competitive edge. Take a look at Japan’s worsening economic situation after it unplugged 30 percent of its baseload generating capacity in shutting down all 50 nuclear plants for testing following Fukushima—they are dealing with a record trade deficit, expensive electricity, dependence on foreign fuel, fear of summer blackouts, and the threat of a manufacturing exodus.

Instead of repeating the green energy mistakes made by the U.S. and Europe – that is, chasing after a nonexistent grid-friendly renewable energy source – Australia could more wisely invest its carbon tax revenues to build a fleet of state-of-the-art third generation nuclear power plants that could generate enough carbon-free electricity to supply the country’s baseload power needs for the next 50 to 80 years. Isn’t that the ultimate goal of the green energy movement—to stop putting carbon into the atmosphere?

Many emerging economies are moving toward that solution. The World Nuclear Association reports more than 220 new nuclear plants are moving from the drawing board into construction phase worldwide, and that 300 additional nuclear plants have been proposed. China, India and Russia are advancing more than 100 new nuclear power plants through the design-construction pipeline. In addition, South Korea, Vietnam, South Africa, Saudi Arabia, Jordan, Egypt, the UAE, the Czech Republic, the UK and numerous others are initiating or beefing up their nuclear generation capacity. Even the U.S., which is awash in dirt-cheap natural gas, approved construction of its first four new reactors since Three Mile Island.

John Borshoff, CEO of Australia’s Paladin Energy, probably said it best: “Nuclear is not here because people love it, it’s here because there is no option, period.”