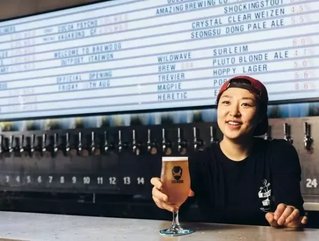 Scottish craft brewer BrewDog has debuted its first flagship bar in Asia, in a bid to tap into the continent’s vibrant beer scene.

The brewery has chosen Seoul, South Korea, as the location of its next bar as it continues its global expansion.

Located in the neighbourhood of Itaewon, the beer maker says said that the area is ‘famed for its cosmopolitan nightlife and world-class bars and restaurants’.

BrewDog’s co-founder, James Watt, said that the company has seen “a huge explosion in the global craft beer scene”, describing how South Korea has established itself as the “craft beer hub of Asia.”

He added: “Seoul has been at the heart of this explosion, and we’ve had our eye on this burgeoning craft beer scene for a while now, waiting for the perfect site to set up a BrewDog home.”

“A city that champions the excitement, zeal and innovation of craft beer deserves more hubs in which to indulge and celebrate truly great beer.”

"We couldn’t be happier to finally provide an outpost for unapologetically awesome beer in Asia and look forward to spreading the craft beer revolution to more people across the continent.”

The new bar will also be BrewDog’s second BrewPub site, after the brewery launched its first in London’s Tower Hill in May.

Containing a 10-hector litre brew kit, the South Korean bar will be the first site outside of the UK and USA to officially brew BrewDog beers.

Over the past 10 years, BrewDog has exported to over 60 countries globally thanks to its crowdfunding initiative, Equity for Punks, which has seen the brewery raise over £60mn ($77.4mn) since 2009.

So far this year, BrewDog has owned six new bars in the UK, its fifth bar in Sweden, and two new bars in Columbus, Ohio, where the brewery has its US headquarters.

A third brewing site in Brisbane, Australia, was also announced, adding to the Scottish brewer’s facilities in the USA and UK.