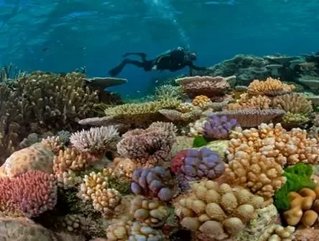 Life’s not so bad for Australia’s coral reefs.

As the oceans heat up and the world’s temperature continues to rise (even despite our best efforts to green the planet), more than 1,000 kilometres of coral reef along Australia’s coastline are actually benefitting from the warmth – a finding that goes against what scientists predicted would happen, the Herald Sun reported.

In the latest Australian Institute of Marine Science study, 27 coral core samples from six locations were selected by researchers, who then determined the age of each sample. The results were quite surprising: the coral collected from the southern ocean region, for example, was found to have grown the most significantly, despite the fact that the water is coldest there.

Researchers pointed out, however, that the southern ocean region has experienced the greatest temperature increase.

"Those reefs have actually been able to take advantage of the warmer conditions," said Janice Lough, a senior AIMS research scientist who co-authored the study, to the Herald Sun.

The results mirror those compiled through a study conducted by researchers at James Cook University, who studied the various corals that make up the Great Barrier Reef in order to figure out which species were more adaptable to the changing ocean temperature and acid levels.

Some corals were found to possess certain ‘zooanthellae’ cells such as “warm genes” that allow them to adapt to the rising temperature, while others were able to survive in the low-pH level “submarine springs.”

Researchers determined that while coral wasn’t going to go extinct due to climate change, the better-suited corals – typically the mound-shaped types over the branch-shaped variety – would likely end up dominating the reef’s landscape.

“Overall, it’s good news for coral, but we need to keep it in context,” said Emily Howells, a James Cook researcher on the project. “The overarching question is whether they can adapt at the same rate that the ocean temperature is rising.”