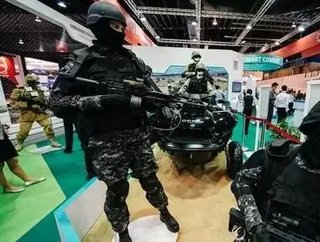 Modern warfare is already a battle over the latest technology. In fact, for centuries, countries have been competing over whose army is the most technologically capable. This has seen huge spending on research and development by armies across the world.

Technology, however, is unpredictable, so these competing corporations scramble to uncover every single advantage technology has to offer. Being able to anticipate any and all technological disruptions means armies can avoid any strategic surprises further down the line.

The days of simply developing weapons and vehicles are long gone. Having the most technologically advanced army was once the way to ensure military superiority, but that’s no longer the case with even basic, prolific technology such as mobile phones presenting a significant threat – as with phone-activated improvised explosive devices (IEDs) in Iraq and Afghanistan. The technological landscape is constantly evolving.

Since opening its first office in California’s Silicon Valley, DIUx has awarded $100mn in government contracts to 45 pilot projects, most of which have gone to startups and smaller firms that aren’t among the big, traditional military suppliers.

ST Engineering – a Singaporean defence corporation with offices around the globe – recently announced a startup venture arm to invest in disruptive technologies such as data analytics, robotics, cyber security and autonomous technology. ST Engineering has announced that it’s putting aside US$150mn for ST Engineering Ventures to use as investment capital. With new offices in the US, Israel and Singapore, the company is set to expand as it begins to invest in a wealth of new technologies.

Vincent Chong, President and CEO of ST Engineering says: “As a technology and engineering Group, ST Engineering has been delivering innovative and game-changing solutions for our customers. With the increasingly dynamic and competitive technological and business landscape, we see a need to adopt open innovation, moving beyond traditional R&D (research and development) approaches to seek new technologies and ideas outside the Group that complement our internal capabilities.

“We are not looking for one-hit wonders, but breakthrough innovations that will either strengthen our current portfolio of businesses or generate new lines of businesses. This requires astute technology investments and partnerships, a pervasive culture of innovation and an environment where our engineers can brainstorm freely outside of business and operational constraints to develop new ideas and solutions.”

As well as investing in technology startups, ST Engineering Ventures will offer access to its established business network and distribution channels, giving startups a quicker route to market as well as much-needed funding. On top of this, ST Engineering Ventures will give individuals and startups the opportunity to see their ideas go to market through an Open Innovation Lab that offers a unique collaboration platform with a dedicated applied engineering team, and access to advanced equipment. Again, this could dramatically speed up the development of these technologies. This has huge implications for the defence industry, but also from a wider technological perspective too.

The defence industry has been responsible for more technological advancements than perhaps we realise. We already have military robots responsible for bomb disposal and cyber security is a growing concern for governments around the world.

While this has implications for modern warfare and defence, there’s also the chance that rapid developments in autonomous vehicles, robotics and cyber security could be made to benefit other sectors and consumers too, as we saw in the nineties with GPS. Global Positioning Satellites were launched by the US Department of Defense long before becoming available to the public in 1996. We also have the military to thank for programmable computers, microwaves and the Jeep.

Naturally, the first thing people think of when considering the applications of autonomous technology in defence is weaponry that needs no human interaction. Already, there are groups set up to fight against these technological gains. Mary Wareham is global coordinator of the Campaign to Stop Killer Robots and she recently spoke to Spectrum about this technology. She says: “Drone technology is starting to proliferate from the handful of countries that had it into more hands... We expect the same to happen with autonomous weapons if it’s not brought under control very quickly.”

Of course, delving deeper into autonomous tech doesn’t just have implications for weaponry, but also for the safety of troops. Autonomous vehicles could be used to collect stranded soldiers, map and explore unknown areas and could be developed to better house the troops inside when there’s no need for a driver.

For a defence corporation to get directly involved in the technology industry by investing in start-ups means a company such as ST Engineering can get ahead of the latest technologies and apply them to its own efforts in the industry.

For companies such as ST Engineering, it’s important to get ahead of all technologies and to closely monitor what’s being developed. This could be as much about developing their own technologies as it is about seeing what others might be doing.