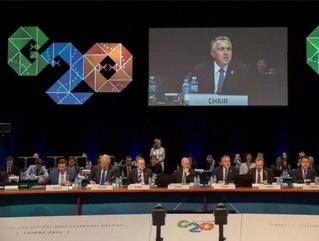 Finance ministers and central bank governors met in Cairns on Sunday to continue to outline financial plans before the main G20 meeting in Brisbane next month. In his closing statement, Treasurer and G20 host Joe Hockey commented on the success the contingent of leaders has had so far.

“The main outcome from this meeting was the excellent progress we are making towards meeting our ambitious target from Sydney to lift global economic growth by 2 per cent over the next five years,” said Hockey. “We have come a long way in a short period of time.

“The IMF and OECD have looked at over 900 measures put forward by countries, of which 700 are new measures, and they estimate our efforts could lift global GDP by 1.8 per cent through to 2018.”

But Hockey has also made it clear that there is plenty of work still to be done.

“I want to emphasise there is much more for us to do, particularly off a lower base. We showed a unanimous resolve to improve the effort.”

Improved infrastructure was a focus of the meeting. The group of finance ministers and central bank governors have made this a priority because of its “potential to address demand weakness” and its possibility to be a “key driver for improving productivity.”

“We have now agreed to progress a multiyear Global Infrastructure Initiative. This initiative consists of an integrated set of actions to increase quality infrastructure investment right across the G20 and beyond,” shared Hockey.

The G20 group has committed to crafting a database of infrastructure project to assist with connecting potential investors with various global projects.

“We are unified in our mission to modernise global tax rules and close gaps that have emerged in recent years,” he said.

“We have endorsed far-reaching initiatives which will arm our tax authorities with the information they need to identify tax evaders through the automatic exchange of information using a Common Reporting Standard. We agreed to begin exchanging information through use of the CRS commencing from 2017, and this will send a strong deterrent message to tax cheats with immediate effect.

We’re urging other jurisdictions, particularly financial centres, to match our commitment. For the first time, the G20 has supported further cooperation between our tax authorities on their compliance activities. I look forward to further concrete progress on this space by the Brisbane Summit.”