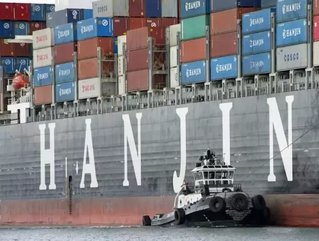 The South Korean government has announced that it will be supporting its struggling shipping industry following the bankruptcy of national carrier Hanjin and the continuing fall global shipping demand.

The government is looking to create a state-backed financing company (worth as much as $5.7 billion) to help its shipping and ship building industries which are both suffering from the global trade slump.

Speaking to the BBC, Maritime trade analyst Greg Knowler said: "As an export economy, South Korea is heavily dependent on the shipping industry. But slowing consumer demand has put the brakes on its export cargo volume. Hanjin Shipping, its largest carrier is bankrupt, debt-ridden HMM is owned by Korea Development Bank, and the shipyards have seen orders all but vanish this year as domestic and foreign orders have dried up."

Orders for new ships from South Korea have dropped by a massive 87 percent compared with 2015 according to the ministry of trade. "The shipping industry in Korea is a huge employment provider, especially the ship yards where a single ship can require more than 1,200 workers," Knowler explained.

"Pressure from the yards, carriers, ports and militant unions have made the government step in with today's announcement."

The dearth of South Korea’s shipping industry is similar to the 2008 financial crisis. Immeasurably influential ‘too big to fail’ companies have seemed to lack the ability to spot downturns before they happen – a behavioural facet that explains the shock at the drop in ship orders. Can $5.7 billion save South Korea’s shipping industry?  In a constantly changing, globalised world, coming to an answer is far from easy.