In another article we discussed with Peter Bradford, MD and CEO of Independence Group (IGO), the significance of the company's newest asset, the world class, low cost Nova nickel mine which will come on stream later this year. The ability to fund this important development, though, has derived largely from the strategy the company has pursued in the 14 years since its establishment and listing on the ASX in 2002.

By the time of its IPO the company had secured a 12,500 square kilometre exploration tenement on what is now known as the Tropicana gold belt (though at the time it was not known for its gold potential), at the western edge of the Great Victoria Desert. Subsequent exploration and development was undertaken by AngloGold Ashanti, which farmed in to the project in the same year, IGO retaining a 30 percent interest. AngloGold discovered the Tropicana deposit in 2005 and the partners gave mine development the go-ahead in 2010 based on a feasibility study based on mining the Tropicana and Havana deposits, and treatment of 5.8 million tonnes per annum (mtpa) of ore to deliver average gold production of 330,000 to 350,000 ounces per annum over a ten year mine life.

By 2012, gold resources in the deposit had grown to 7.89 million ounces, establishing Tropicana as fourth largest gold mine in Australia. First ore was sent to the crushing circuit in August 2013, first gold was poured on 26 September, ahead of schedule and on budget, and the processing plant successfully achieved its ramp-up target of 95 percent plant availability at a throughput rate of 5.8 mtpa within six months. For IGO, Tropicana has been, and continues to be a fun ride, says Bradford. “Once the startup and first production were behind us we started to unlock additional value in the project. One opportunity is ongoing exploration along the Tropicana belt for the next Tropicana, so watch this space because we think it may be there. Another is by “drilling at depth beneath the existing Tropicana pits, most of which bottom out on the lack of drill information, where we expect to be able to significantly expand the known resources through this drilling.”

Additionally, there's room to optimise production. Work to expand plant's nameplate capacity from 5.8 mtpa to more than 7 mtpa is coming to its final stages, he says. “The joint venture partners recognised that major items of equipment like the crushers, the high pressure grinding rolls and the ball mills all had spare capacity, this allowed us to expand capacity by working through the bottlenecks in the materials handling of the crushing circuit and slurry circuits, upgrading conveyors and pumps.” All that remains is to complete the additional capacity in the carbon-in-leach circuit, to bring residence time back to design levels, so that recovery levels are maintained at the higher throughput rate.

Tropicana is remote and that has meant that, till now, some 1,500 road trains a year have been needed to fuel its plant and vehicles. To derisk delivery of fuel and decouple the risk of fluctuating oil prices, in mid-2014 the joint venture partners committed to a A$140 million gas project. The Eastern Goldfields Pipeline, constructed and operated by APA Group was commissioned in February this year cutting the number of road train movements down to less than 500. “Changing to gas will reduce operating costs over the life of the project,” says Bradford. “We are in the process of transitioning the power house from diesel operation to gas, and we expect to finish that work by mid-year.” The joint venture works on a simple basis, with IGO writing a monthly cheque for its 30 percent share of capital and operating costs and receiving 30 percent of that month's gold production. With gold prices on the upturn that means Tropicana contributed around 45 percent of IGO's A$499 million revenues in the 2015 financial year, its first year of full production.

Australia is enjoying good gold prices, and like other Australian gold producers, IGO is enjoying good margins from its share of gold production at Tropicana. At the same time base metals prices have been weaker. IGO is diversified and has irons in both fires: “Nickel and gold are somewhat counter-cyclical,” says Bradford. “Over the last twelve months nickel prices have come down by around 30 percent and as a result of that, worldwide it is estimated that 50 percent of the nickel industry is losing money on a cash basis. It is a miserable time for the metal. However our Nova project combines high grade with low cost structures, therefore even at current low nickel prices we will achieve an average 40 percent cash margin on the project, which is outstanding. But this is at the bottom of the nickel market and with the commodity expected to be in a supply deficit this year we expect prices to start rebounding”

When the company acquired the Long deposit from BHP Billiton 14 years ago it was perceived to be at the end of its life, with only a few months of reserves in front of it. It has been a remarkable achievement, through a combination of investment and exploration, to keep it producing. Long has yielded more than 100 tonnes of nickel since being acquired by IGO and the Company has been able to consistently replace production with new reserves. This is an underground mine, the ore being removed by trucks, stockpiled and then moved to BHP's nearby concentrator for processing.

More recently, in 2011, IGO purchased the Jaguar copper and zinc mine 300 kilometres north of Kalgoorlie and close to the small town of Leonora. Today this operation, together with Long, gives IGO the other half of its revenues. Both mines continue to generate positive free cash flow margins, despite current low copper and nickel pricing. Both these assets are wholly owned and operated by IGO. Jaguar is mined using a fleet of R1700 Caterpillar Load Haul Dump (LHD) trucks, 60 tonne Caterpillar trucks and other equipment. Ore is processed at the nearby Jaguar concentrator which produces both zinc and copper concentrates, the latter having silver and gold in it too. The concentrates are trucked to the port of Geraldton where they are shipped to IGO's customers.

This year the business will be transformed by the advent of the Nova nickel mine. Instead of being split evenly between Long and Jaguar, and Tropicana respectively, more than 50 percent of future combined revenues will come from Nova. This is not to deny the continuing significance of Jaguar and Long: what it will mean though is that from 2017 onward we will see IGO emerge as a truly diversified, mid-tier mining company. “Gold, nickel and copper are all cyclical commodities. For single commodity companies: it’s fun at the top of the market with good operating margins being made but not much fun at the bottom! At the bottom of the market tough choices have to be made about what costs you continue to wear, and that can result in capability that is needed long term in the business having to be retrenched because you can't fund it at that time. Some discretionary expenditures vital to long term growth, such as exploration, have to be reduced. Our strategy is to be diversified, with a mix of commodities in the portfolio, currently gold and base metals, so the risk to the business due to single commodity fluctuations in any one year is reduced.”

Natural hedging between the metals means IGO is really unlikely to have all of the commodities it produces at the bottom of the market at the same time. In turn that ensures the regular cash flow required to keep capability within the company and to keep the focus on those long term growth projects that he always has his eye on.

Bradford said he also wants IGO to continue to play its part in developing talent for the company and the industry at large. “We support scholarship programmes for degrees students and we have a programme of vacation work while they are studying to give them access to the industry.” The company also runs a graduate programme, taking people on two year internships and introducing them to varied aspects of the business and aiming to turn out fully functioning professionals.

Close to its operations IGO supports the community by funding  leadership programmes in the schools and communities around its mining operations. We are also committed to building capacity and providing opportunities for the traditional owners in the areas we operate “At Nova, for example, we are putting in place a targeted training programme to improve the job skills of indigenous employees who may not have had the opportunity to do formal work before. They can then apply for jobs at the project. We want to have a lasting impact and leave a legacy so we'd like to help individuals and groups to form businesses. We have been working to support two different contracting initiatives that provide opportunities for indigenous groups at Nova and Jaguar.”

Peter Bradford's eyes are constantly looking outward to identify the next big project, a future Tropicana or Nova. “The lifeblood of any mining company is its pipeline,” he declares. “We continue to be very active on the exploration side to discover the projects of the future.” One area of interest is the large tract between Nova and Tropicana, an under-explored geological province that has delivered two of Australia's best gold and base metal discoveries in the last 10 to 15 years. “We are uniquely placed for investment and exploration of that province.”

In another part of Australia altogether, 400 kilometres northwest of Alice Springs IGO in a joint venture with ABM Resources with licences covering what Bradford describes as a 400 kilometre long, major continental-sized structure that can be discerned from space. Initial drilling at the Bumblebee deposit has given promising results with gold, copper silver, lead zinc and cobalt. As he says, that is quite a suite, that will emphatically seal IGO's diversity credentials. But, as he also points out, “this is just the first drilling on the first prospect on what is a prospective 400 kilometre long belt and many additional prospects have already been identified.” 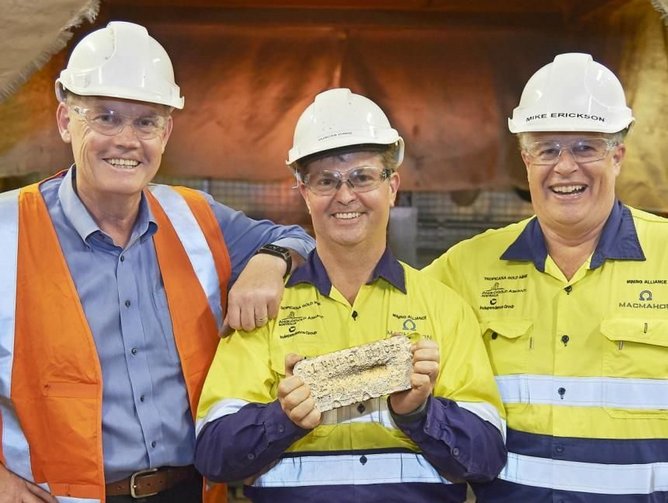 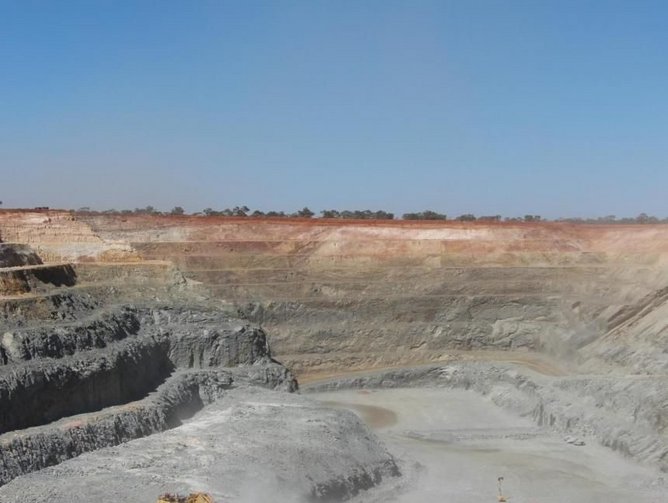 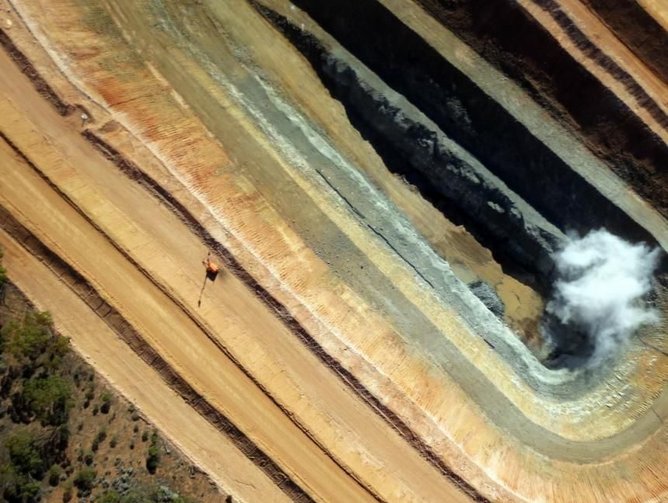