When you think of railways in Australia, you may think of John Holland Rail. As the owner and operator of 30 percent of Australia’s government- and corporate-owned railway networks, as well as the owner and operator of the largest and most technically advanced fleet of railway maintenance and construction equipment, John Holland Rail is the largest private operator of the infrastructure in Australia. With specialization in everything from planning and construction to maintenance, John Holland Rail offers a complete approach to railway infrastructure that sets it apart from the competition.

“I do believe it is a very unique value proposition in the market – there are railway operators, railway maintainers and railway constructors, but there is no other company that offers that full life cycle,” says Richard Stewart, General Manager of Operations at John Holland Rail. “We self-perform, and we have a very large in house engineering and project management capability. We have 2,500 John Holland people working on railway projects at the moment and another 4,000 subcontractors. So we are a large employer, and people are really at the center of our values.”

Moving Projects Ahead with Efficiency

As a major force in Australia’s railway industry, John Holland Rail’s portfolio is full of complex and vital projects significant to the country’s development – projects like Perth City Link.

“If you’re familiar with Perth, its central business district is basically split right down the middle by its railway lines – Perth Central Station sits between an area called Northbridge and the actual business district of the CBD, and over the years it’s created a bit of a divide in the city,” says Stewart. With the Perth City Link project, John Holland Rail succeeded in the daunting task of bridging that gap while keeping Perth’s commuters moving in the meantime.

“The Perth City Link project was about sinking a section of the Fremantle rail line underground, so that the land above could be developed, effectively bringing the two parts of the CBD together,” says Stewart. “It was a very complicated project because we had to keep Perth Station and the train network operating all the way through the project. That meant several rail slews to divert the existing railway into temporary lines to open up areas we needed to work in to build a new cut and cover tunnel and railway infrastructure underground. That’s an exciting project, and I think it’s really changing the face of Perth CBD forever for the better.”

Other notable recent projects from John Holland Rail’s portfolio include the Southwest Rail Link to connect new homes in Sydney and prepare suburbs for further development; the $4.5 billion Victoria infrastructure project – Regional Rail Link - that has John Holland completing two of six segments, the Southern Cross Station and the City to Maribyrnong River sections; and the recently completed Sydney Inner West Light Rail extension, which doubled the size of Sydney’s light rail system by extending it to Dulwich Hill, through the main shopping precinct and Sydney CBD, and eastward toward Moore Park, Sydney’s cricket grounds and football stadium, and the University of New South Wales.

“A key thing to note is that they have been completed significantly ahead of schedule,” says Stewart, explaining that the company utilizes an array of efficiency techniques, including modulization and prefabrication offsite, to meet these goals. For its Springvale Road Rail Alliance project, for instance, John Holland Rail engineers were able to condense a projected nine months of weekend work down to a finished project in 20 days back-to-back while still maintaining the needed quality of work. As with any industry that can potentially cause disruptions and disturbances in the lives and schedules of everyday citizens, John Holland Rail recognizes the importance of meeting and exceeding schedule projections. “When you’re causing these disruptions to local communities, the quicker you can get out of there and let them get back on with it, the better it is. I think we’re well recognized for achieving that that among all the communities in which we’ve worked.”

Railway construction may be John Holland Rail’s business, but the factor that drives that business is the people behind it. “Our tagline is ‘Powered by People’ – I think that is really the sentiment of our values,” says Stewart. “Innovation and care are two of our core values, and we are really connected to enhancing the wellbeing of all our people.”

The best way to protect your employees is by offering them a safe work site, and John Holland Rail is committed to safety. “We have an unwavering commitment to safety – safety is at the heart of what we do,” says Stewart, noting that the business has developed powerful strategies to meet mandated global safety requirements. “All of our projects must ensure that they are meeting those requirements as absolute minimum standards. Our people are very clear about our expectations in relation to safety, and that is strongly supported by leading indicators.” It is through these strategies that John Holland Rail has reached such achievements as a lost time incidence frequency rate of 0.08 per million man-hours.

But this focus on people does not solely apply to its employees, either – John Holland Rail is also committed to positively impacting and improving the communities in which it builds. “Community relations are something we’re very strong on,” says Stewart. “All of our projects have community initiatives embedded in their delivery – things like assisting skills within the local communities near projects we’re working on, working with local community groups on initiatives that they’re looking to implement, and aiding healthcare organizations and local care centers. We spend millions of dollars per annum initiating these projects and monitoring them as part of our monthly board review.”

John Holland Rail boasts several examples of this community outreach activity, including the work that its staff did at a neighboring elder care facility while conducting work on its Cronulla rail line upgrade and duplication project. “We were duplicating a line from Sutherland to Cronulla, and we had a project office at Sutherland and those project offices were next to an aging care center,” says Stewart. “Our people on that project dedicated their own time to do some landscaping of the aging care home grounds, updating the kitchen and retiling, as a ‘thank you’ for putting up with us being next door to them for an extended period of time.”

John Holland Rail workers have achieved a number of successful community initiatives, from raising $150,000 in donations for New South Wales-based children’s hospice care facility Bear Cottage to partnering with Camp Australia for a two-day program over school holidays for children of workers on John Holland’s South Morang Rail Extension project. “It was a very simple initiative, but one that was very powerful,” says Stewart. “We brought the kids in to a designated safe area within the construction site, introduced them to engineering and construction as a career and gave them backpacks filled with goodies including a children’s hard hat, vests, disposable cameras so that they could take pictures. We got some different games going on, and were just trying to give a little back to the community – looking after kids for a couple of days during the school holidays, so that parents didn’t have to worry about child care for those days.”

John Holland Rail also works extensively to promote diversity, from its commitment to increase female participation to 20 percent by 2015 to its extensive work with Australia’s indigenous communities through such projects as its Career Tracks Strategy. This program in particular works to provide education and training opportunities for indigenous peoples, especially those in rural areas. Stewart cites the company’s Roy Hill Rail program in Pilbara, Western Australia – a 390km railway running from the Roy Hill mine to Port Hedland – as a prime example of John Holland outreach. “There we have three groups we’re working closely with to see how we can leave a legacy there for those communities,” he says. “We also look to partner with local indigenous companies and work with them to help train them and get them up to the level we need to be able to work for us – and hopefully lead a legacy for them to continue working with others when we move out of the area when our projects are complete.”

A Legacy to Uphold

“John Holland is steeped in culture,” says Stewart, noting that the company has recently turned 65 years old. “Our founder John Holland was an incredible person – an engineer who served in the Special Forces during WWII, he really brought the values to the organization. That legacy still lives on in every one of our projects

That pride in a job well done and a community linked closer together shines through in John Holland’s people to this day. “That’s one thing I’m most proud of, that I get to be involved in some of these really life changing projects. To get involved at the start, when we come up with these concepts, and see them implemented and then to see the community taking them up – there is a lot of pride in me and the team to e able to see what we’ve done.” 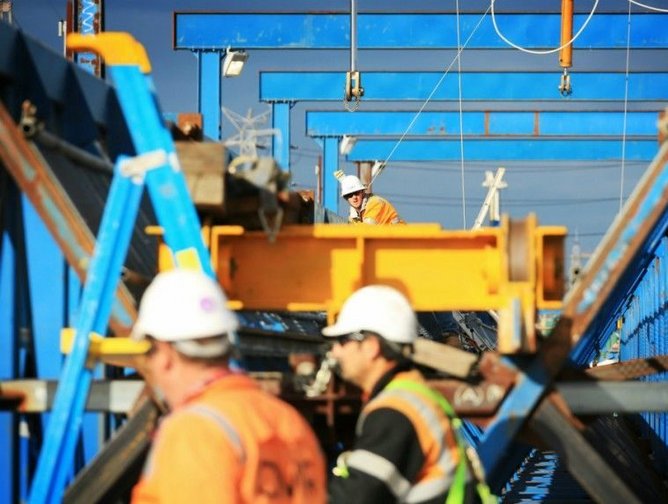 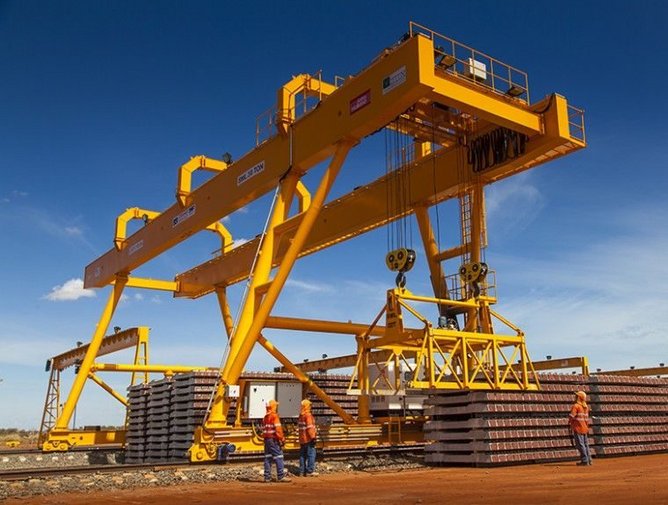 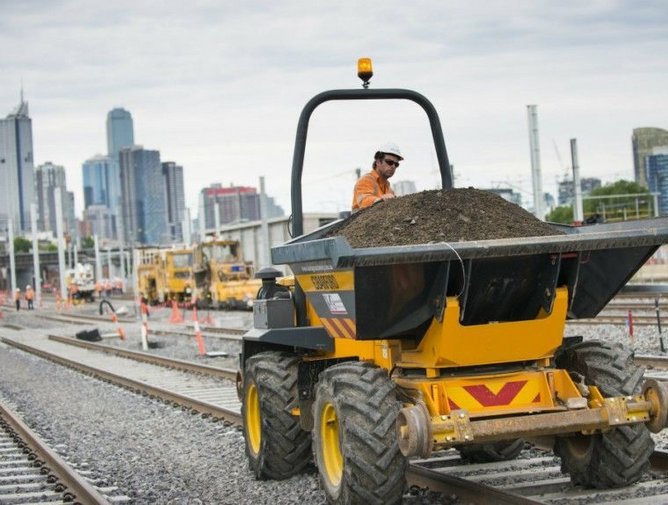 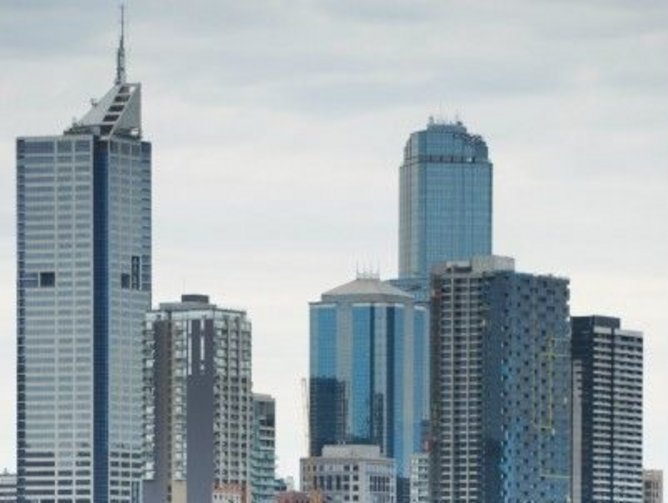