On completion in 2016, the new RAH will be the biggest, most technologically advanced hospital in South Australia and one of the most advanced in Australia, employing close to 6,000 people and accommodating 85,000 inpatients per year.

We had the opportunity to talk to Con Kerpiniotis, operations director for HYLC Joint Venture, about the progress that has been made on the build, as well as the numerous technological and construction innovations used throughout the project thus far.

The sheer scale of the project meant that providing the logistical requirements to maintain the required rate of progress was a huge undertaking for the HYLC Joint Venture.

“Construction is a function of personnel and materials,” shared Kerpiniotis. “If the materials are not available, the personnel cannot perform.”

The team worked with two logistics planning and monitoring systems in tandem, as the two systems complemented each other. There was an electronic booking system for deliveries entering the site, as well as a series of boards that planned tower crane hook allocation. Having two systems that worked together seamlessly allowed for an organized, prepared construction site. At the peak of construction, eight tower cranes were used in conjunction with mobile cranes that provided logistical support. This feat may not have been possible without the planning and monitoring systems.

Logistics were affected by several uncontrollable aspects, including weather, traffic: even a flat tyre could throw the whole plan off a day. The construction site is boxed in on all sides, with a railroad to one side and a flight path above. There were 25,000 deliveries of concrete alone on this project, so the joint venture had to do something to keep the work site operational.

Traffic played a heavy part in delivery schedules: the construction company ended up adapting their deliveries to work around peak-hour traffic of the morning or afternoon. Planning and micromanaging every aspect was necessary, as was having the ability to adapt to the unforeseen circumstances to keep the material movements flowing.

The new RAH has been under construction since 2011, so many impressive construction landmarks have been met by 2015.

In the last year, the new RAH project team has grown to over 2,000 personnel. Since the beginning of the build, 8.5 million hours have been worked to construct the hospital, which has a building footprint of 176,000 square metres and an area of 360,000 square metres.

September of 2014 saw the topping out of the concrete structure; in total, there was 155,754m3 of concrete used, which included 18,000 tonnes of reinforcement. One slab per work day was poured, and a total of 4,200 columns were poured over the length of the project.

Since the New Year, work on the non-clinical areas of the building—including commercial areas, kitchens and facilities management areas—have been completed. The high-voltage infrastructure is complete and the hospital has connected the supply feed from South Australia Power Network to the substation.

The new RAH will be completed in 2016, so there is still much work to be done. Upcoming work includes completing the curtain wall, as well as the emergency department, intensive care unit, acute medical unit, monitoring units and the mental health, pathology and outpatients wards.

The scale of this project means that safety is even more paramount.

“As a project we have some of the most stringent safety requirements in the industry that all our contractors are expected to adhere to,” shared Kerpiniotis.

Each person who works on the project is required to undertake a full day induction. This takes them through the site environment, understanding safety essentials and also provides them training to help manage personal health and wellbeing, such as the Mates in Construction suicide prevention program, a not for profit organization aimed at reducing suicide and improving mental health and wellbeing within the Australian construction community.

Other safety tools recognised and used for this project have included minimum standards that tie in with the team’s safety essentials toolkit, monthly safety campaigns that target key areas of risk and hazard assessment cards that record daily hazard checks.

“Safety is of high priority and we measure the effectiveness of our toolkits / training and communication through specific KPI’s and total reportable frequency rates,” said Kerpiniotis. “One of the key elements of managing the safety and wellbeing of our workforce was to introduce a drug and alcohol policy across the site. We are one of the first contractors in South Australia to implement a random drug and alcohol policy.”

It’s no surprise that the biggest build in South Australia would also play host to several construction and manufacturing innovations.

For example, the western riser was fabricated offsite and brought to the construction site in modules, the heaviest of which were 6,500Kg. It consisted of a primary steel support frame with multiple engineering services hanging inside the frame. The riser was designed for structural adequacy including thermal and seismic, engineering services compliance including fire rating and accessibility for future maintenance.

All design disciplines worked together seamlessly with use of BIM—Building Information Modeling, a shared knowledge resource for information about a facility forming a reliable basis for decisions during its lifecycle. Having a virtual understanding of the riser at design phase made agreeing on the size and the design of the modulations easy. When the modules were delivered, the pieces fit together perfectly.

The helipad also contains some genius innovation. Since the new RAH is categorized under the Building Code of Australia as an Importance Level 4 Facility, which is a building that is essential to post disaster recovery, a helipad was a necessity.

The dual helipad has been equipped to allow 24-hour operation and is fitted with an illuminated wind direction indicator, touchdown and lift off area lighting, area flood lighting, building warning lights and various radio controlled equipment. Because the helipad is located in such close proximity to habitable rooms with windows that open, all of these aspects, as well as acoustic insulation and having an air conditioning system that switches automatically to circulation mode during helicopter arrivals and departures, are incredible, advanced features

The helipad decking features the most advanced deck integrated fire fighting system available, which allows for the rapid extinguishing of deck fires. The perforated aluminium deck landing surface incorporates a patented, passive fire-retarding system that works by allowing burning fuel draining through the holes to atomize as it passes through an aluminium mesh screen. Burning fuel is starved of oxygen and rapid heat dissipation occurs in the mesh. The fire is retarded immediately. Spilt fuel is quickly and safely drained away unburned, and any remaining vapour burn-off can be extinguished in seconds by deck mounted water sprays. Up to 97 percent of spilt fuel is recovered unburned. A full-perimeter drainage system ensures that liquids are channelled from the helipad decking to drain to an interception tank, in fuel spill mode, or to the stormwater system in normal mode.

The helipad was supplied by Aluminium Offshore Pty Ltd and was fabricated in China. It was fully assembled at the Chinese factory and then partially disassembled sufficient to allow it to be packed into shipping containers and transported to Adelaide. Once on site a trained team bolted the aluminium framed structure together. The perimeter of the helipad is finished with a 1500mm wide strip of safety netting to prevent falls if someone was ever to step off the edge.

The hyperbaric chamber is a triple-lock chamber that was fabricated by Fink Engineering in Queensland. The chamber, air receivers and deluge tanks were delivered via road to the project site.

Due to the size of the unit, the chamber had to be loaded in while the hospital was under construction and then the hyperbaric area will be built around it. And because of its weight (approximately 50 tonnes), size of the chamber and the requirement to navigate through the building to its final destination, a special trolley was built. The chamber is currently in its final home and work is progressing around it.

The new RAH is an applicant for a Green Star rating, and will be evaluated for the title once the building is complete. The joint venture has implemented a lot of green initiatives through design and procurement to achieve facility operational green star targets plus environmental initiatives through construction.

There are several important green initiatives that have been put in place. In the construction phase, criteria for re-use/recycling of the stated proportion of construction and demolition waste have been met, as has air and noise quality. Hazardous materials’ handling guidelines have been followed, and Volatile Organic Compounds (VOC) have been used correctly. Perhaps the most notable is the joint venture’s decision to avoid using ozone-depleting substances in manufacture, and new RAH’s choice to forgo them in composition.

Hansen Yuncken and Leighton Contractors are 50/50 joint venture partners in the design and construction of the hospital. Both companies complement each other in providing staff and expertise. The team is branded as HYLC and they work together with common objectives. Staff members have joined the team with domestic and international experience centred on either large-scale construction or healthcare experience. The SA Health Partnership stakeholders are working well together bringing their expertise for the journey.

“Communication is the key to keeping things running on the site, and we have that with the attached parties,” Kerpiniotis said. “We’re all focused on delivering a world class facility for South Australians.” 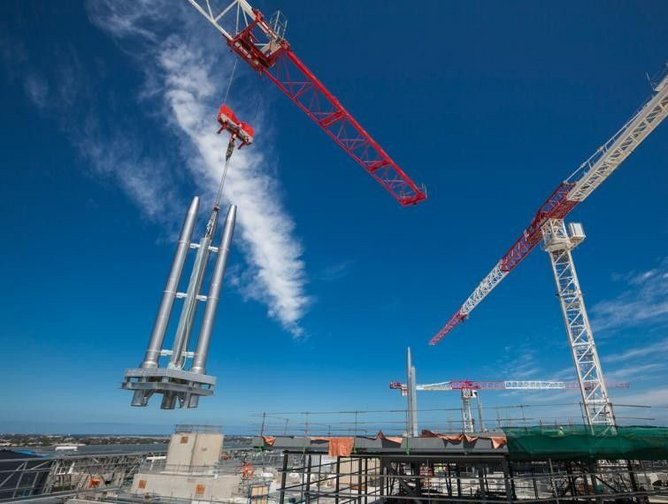 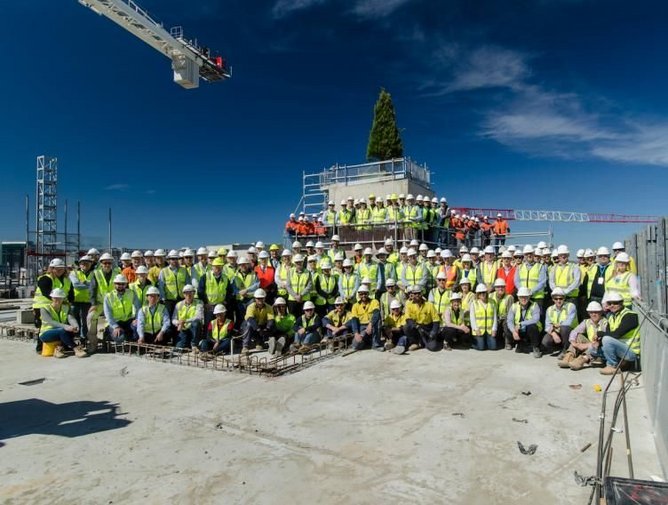 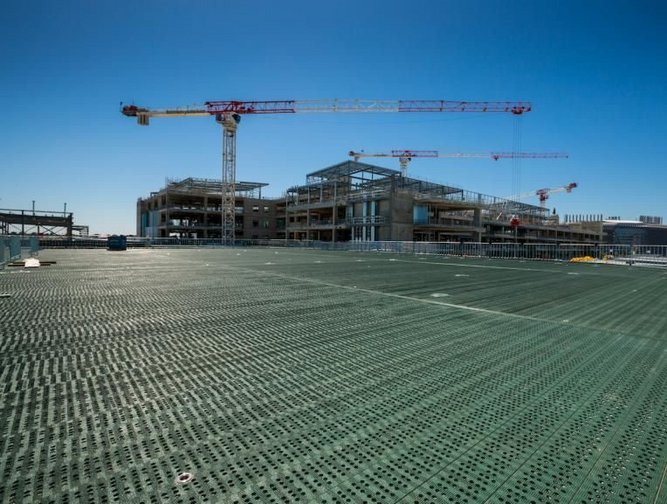 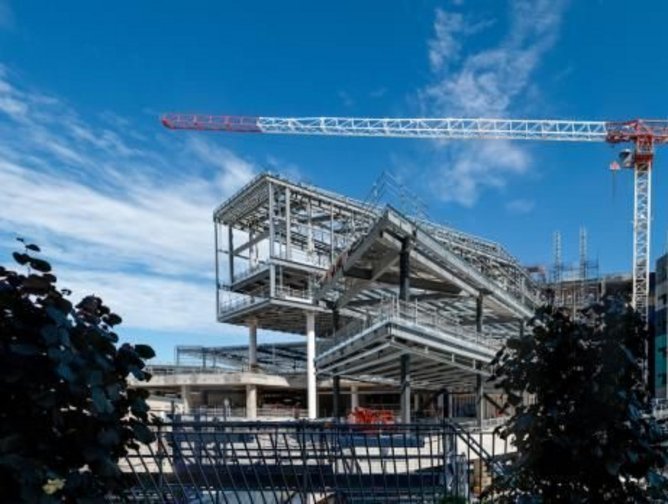 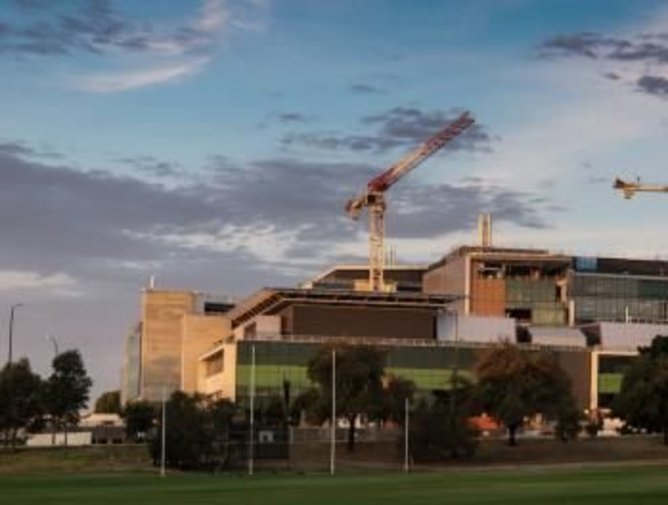 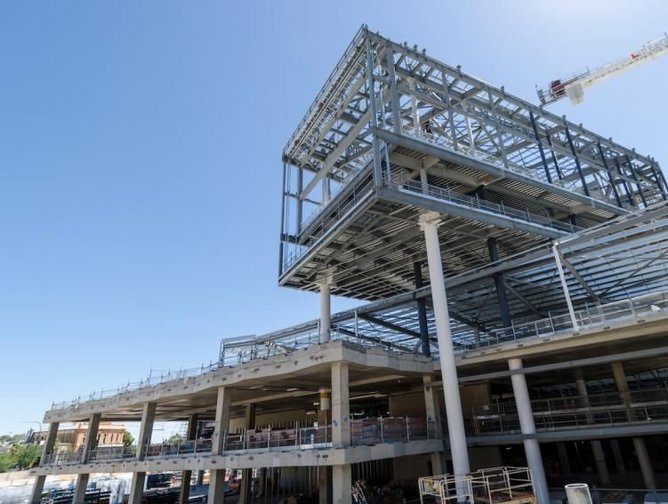 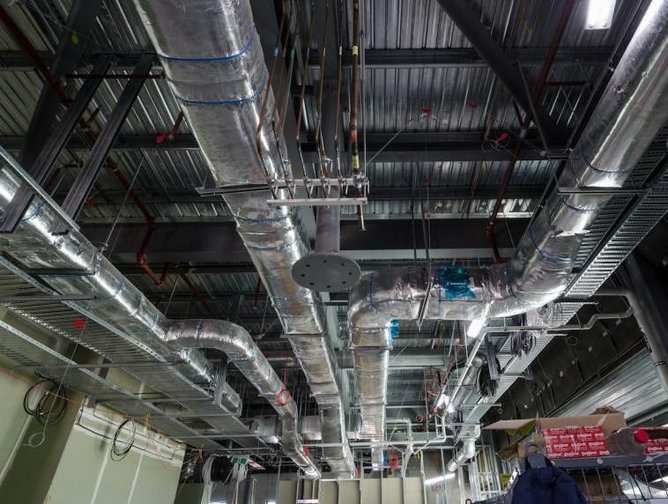 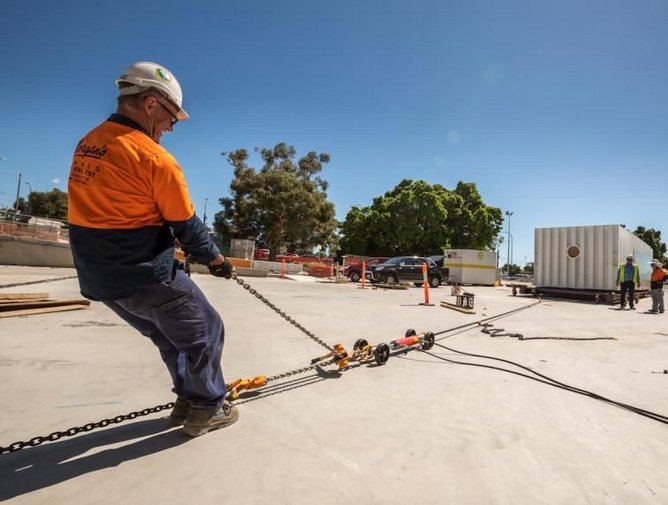 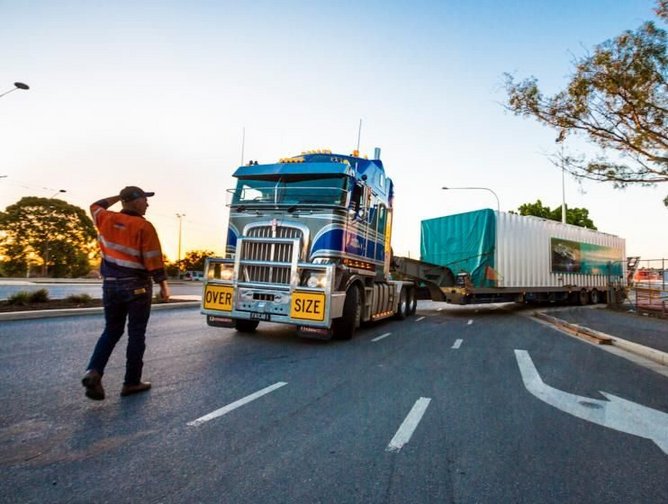