Chestnuts Australia Inc. (formerly The Chestnut Growers of Australia Ltd) is a growers group which was formed in 1991.  Membership is drawn from all over Australia and includes representation from suppliers and large commercial growers, hobby farm enthusiasts, nurserymen and women, Agriculture Departments and other horticultural experts.

Chestnuts Australia Inc. aims to assist its members with relevant information on the growing, harvesting and marketing of chestnuts.

The association is dedicated to the growth of the Chestnut Industry through:

The Australian chestnut industry operates principally in the southern states of Australia, including NSW, Tasmania and Victoria, plus southern areas of SA and the south western area of WA. Approximately 70 per cent of the national crop is grown in north east Victoria.

The main varieties grown are Red Spanish, Purtons Pride and De Coppi Marone. Chestnuts flower during November and December and are harvested from March through to May.

Many chestnut orchards are small family-owned orchards, but there are several large-scale commercial plantings, and the average size of new orchards is increasing.

The chestnut industry has always been aware of the possible biosecurity issues it faced, the main threats being Chestnut blight, Chestnut weevil and Chestnut gall wasp. The depth of knowledge and preparedness was made very evident in 2010 when there was an outbreak of Chestnut blight. This outbreak was reported swiftly due to grower knowledge and biosecurity training. Chestnuts Australia, in conjunction with VicDEPI, were able to inform all growers of the immediate measures that were needed to heighten the level of biosecurity. An Industry Development Officer was appointed in January 2014 to further improve biosecurity vigilance.

Industry potential
Chestnut production is expected to increase to 2,000 t by 2020 as young orchards come into production.

Most chestnuts are handpicked except in many large orchards, which are fully mechanised as a result of new harvesting machinery being developed.

Growers are planting and re-working older trees to newer and more consumer-friendly varieties.

Markets: present and future
Chestnuts are highly valued in Europe, the USA, Japan, China and Korea.

Most growers sell the bulk of their crop through the fresh wholesale markets in each state.

Small quantities of fresh and frozen peeled chestnuts are exported to Japan and Singapore.

The Australian industry produces products such as frozen peeled whole chestnuts, chestnut meal, flour and puree. These value-added products are now being successfully marketed locally and overseas and have the potential to expand the overall market for chestnuts.

Nut size is important in the fresh chestnut market and new pruning techniques have enhanced this quality. 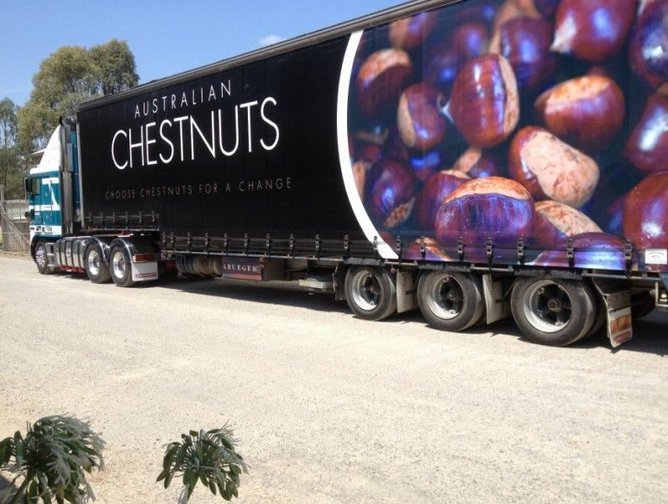