An attitude of achievement

Established late in 2009, Civmec wasted no time in making itself the go-to multi-disciplinary service provider to the Western Australia (WA) contracting market, winning its first contracts to construct two 400T precast intake pump structures for the Binningup Desalination Plant and site civil works in the same year. 2009 also marked the start of construction of its waterfront facilities on the Australian Marine Complex (AMC) at Henderson south of Perth.

Today, Henderson is the largest undercover fabrication facility of its kind in Australia at 120,000 square metres. Roughly a quarter of the facility is dedicated to the fabrication, assembly and commissioning of smart modularised structures up to 4,000 square metres and 18 metres high under a single roof. “It couldn't be in a better location,” says Civmec CEO Pat Tallon. “We can do pretty much anything that any customer can throw at us, and we can do it very efficiently and very quickly.”

According to Tallon, all of Civmec's sites, spread from Western Australia to New South Wales, Queensland and the Northern Territories, were chosen for optimum access to ship, road and rail logistics. In its first four years, Civmec targeted the booming mining and offshore oil and gas (O&G) sectors. Despite recent falls in commodity prices, which have hit Australia's iron ore, coal and hydrocarbons sectors particularly hard, the solid reputation Civmec has gained with the oil industry, such as providing the subsea manifold for Apache's Coniston project, have ensured a healthy continuing order book.

“The contracts are smaller than they were before, but there is still a requirement for innovative expertise – and smaller jobs require just as much project management input as the larger ones,” says Tallon.

It's a similar story in mining. Low prices mean that the majors are typically working their plants to their nameplate capacity and beyond as volume takes the place of margin. The emphasis of the iron ore market has shifted to some extent from China to fast growing markets including India and developing African and Asian economies. However there is still a significant level of confidence among companies like Rio Tinto, which has partnered with Civmec on important projects and the huge Hancock Prospecting's Roy Hill development in the Pilbara, where Civmec was called in when an overseas fabrication contractor failed to deliver. A large package of work was involved, including three structural steel modules up to 160 tonnes, platework, conveyors, extensive cabling, electrical switchrooms and up to 620 Civmec personnel to deliver the job on a tight nine-month schedule.

“We are happy with our performance at Roy Hill, because it proved we can deliver technically and commercially on a job like this,” says Tallon.

A tale of diversification

Nevertheless the downturn is a fact, with Tallon explaining the importance of planning from the outset to diversify from year five onwards and to widen the focus from O&G and mining to infrastructure and defence. The Perth waterfront used to be an under-utilized asset, but now WA’s capital city is finally making the most from it with the $2.6 billion Elizabeth Quay Project, which covers nearly ten hectares of prime riverfront land between Barrack and William streets in the heart of the city. The project creates a magnificent precinct featuring a newly dug 2.7 hectare inlet surrounded by a split level promenade, shops, cafés, restaurants and other exciting entertainment venues. Civmec secured a major package of work on Elizabeth Quay in July 2014, laying down a marker that it had arrived in the infrastructure space.

“The job initially involved the supply of precast marine fascia panels, a very visible, architectural part of the development involving dramatic curved shapes around the whole perimeter. This led to the award of an iconic steel structure, the two architectural arches supporting a pedestrian bridge.  Not many people could have delivered the level of quality they needed,” Tallon says.

Moving from the heart of Perth to the gateway of Perth Airport, Civmec has recently undertaken important parts of the road development around the airport. It has also delivered significant fabrication work at the new Virgin Australia terminal, a world-class facility and the most significant project in Perth Airport’s current $1 billion redevelopment.

These high-profile jobs helped Civmec to secure another contract that will put it very much in the spotlight. In March 2015, Civmec was awarded the contract to deliver the steelwork that is part of the construction of the $1.1 billion Perth Stadium, due to open in 2018. The contract involves the fabrication, surface treatment and installation of over 4,500T of structural steelwork that makes up the stadium superstructure. In June 2015, Civmec was also awarded a further contract on the Perth Stadium to part supply and install precast elements including seating platforms and step units.

“The stadium contract is the latest in a series of projects where Civmec is taking a major role in the development of new infrastructure for Perth,” says Tallon.

All this demonstrates how successfully Pat Tallon and Jim Fitzgerald have led the company from a startup in 2009, through its listing on the Singapore Stock Exchange in 2012, to what is fast becoming a dominating position in the Australian civil contracting market. In a joint venture with Sedgman, Civmec secured its first full EPCC (Engineering, Procurement, Construction and Commissioning) contract, on the expansion of BHP Billiton's Jimblebar iron ore mine in the Pilbara. The $145 million contract involves the installation of a new primary crusher and additional conveying capacity which will employ approximately 270 personnel at its peak.

“We secured this job on the back of delivering to clients through the EPCM process,” he explains. “It puts us into a different space: under EPCM, the client hired an engineer to manage the project, then the engineer hired the contractors. Under EPCC the client specifies what they wants and we come in, take over the design, liability and the risk and build the plant at a fixed, lump-sum price. It's better for the client because it delivers cost savings by cutting out the engineer in the middle.”

Civmec's expansion across Australia, as well as its positioning on the SGX, will place it in good stead when it comes to its next planned strategic leap; expansion into the economies of Southeast Asia. Tallon does not propose to rush this move, however for the coming year, he plans to keep the focus firmly on the home market. This is to take advantage of their recent acquisition of the country's largest privately-owned engineering and shipbuilding company, Forgacs along with its purpose-built shipyard at Tomago on the Hunter River, just 160 kilometres to the north of Sydney. The 22.7-hectare site includes 535 metres of river frontage with two ship basins. It is hard to overstress the significance of this move, since it gives Civmec the capability to be involved in defence builds over the coming years.

The Australian government has just announced that it will spend $150 billion over the next decade to include a doubling of its submarine fleet to 24, three additional destroyers, nine new frigates and twelve offshore patrol boats. This acquisition, added to Civmec's own excellent reputation for making durable structures for long-term subsea performance, gives Civmec the opportunity to become deeply involved in the government programmes including submarines. A strong contender to design these vessels is Germany's Thyssen Krupp, working with Siemens for their power plants. It has been suggested that Civmec would be favourite to build the pressure hulls.

“We wanted to get into fabrication and precast on the east coast,” says Tallon. “There are so many opportunities for these activities particularly in NSW, so we are planning to create a facility that mirrors the Henderson site. It will be a major building block in our growth programme and will make up for the shortfall in mining and O&G contracts.”

Doing right by the people

While diversification and geographical expansion when the time is right remain strategic goals, Tallon zealously guards his company's founding principles, which put people first. One of his mantras is “hire for attitude, not skills,” a philosophy that plays well in Australia's journey to a fairer society. If a potential employee shows commitment and positivity, any lack of skills can be rectified. “We were all apprentices once,” says Tallon.

In April 2014, Civmec was accredited as a Registered Training Organisation (RTO).  The training facility at Henderson, as well as managing apprenticeship and graduate programmes for employees, offers free skills training to indigenous groups.

It's not so much, Tallon says, that Civmec and all its Australian clients have a statutory requirement to employ indigenous personnel and subcontractors, as this is something the company tries to do as a matter of principle. It’s that a diverse and non-discriminatory workforce helps to advance the right development of the society as a whole.

Last year the company got together with the David Liddiard Group (DLG) to create a joint venture subsidiary that will principally engage in securing and providing construction and engineering services with indigenous participation, for projects within the Australian defence sector.

Civmec DLG takes this engagement one step further, says Tallon. “DLG was a company that wanted to develop its people. So we came together to combine our understanding and experience in both industry capability and indigenous participation to ensure that each project is able to demonstrate authentic engagement with local Indigenous communities. We aim to upskill the local workforce, ensuring a sustainable economic benefit wherever we deliver projects.”

As Tallon points out, in the defence sector there's really only one customer. Work must be able to meet very exacting standards in quality, execution and capacity but the government is more committed to indigenous sourcing, and the new entity will be well placed to win defence work. As a further step towards positive community involvement, DLG contracts will incorporate long-term maintenance agreements so that the communities will benefit for many years post-execution.

“We are focused as a company on doing the right thing socially,” he says. “We are very aware that many employees spend long periods away from their families in remote areas, so we try to involve families as much as we can. We send out progress reports and other materials to the families to keep them updated and we'll always help if someone needs to come home in an emergency.

Environmentally, we aim to use renewable energy sources wherever possible, utilise sustainable waste management and endeavor to leave a site in as good or an even better condition than we found it.” 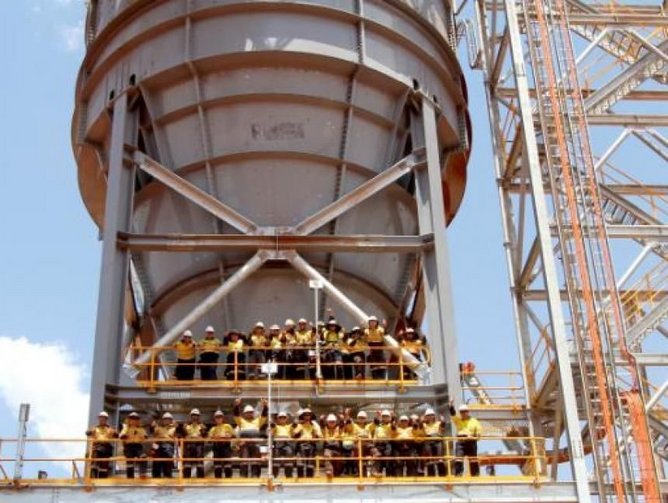 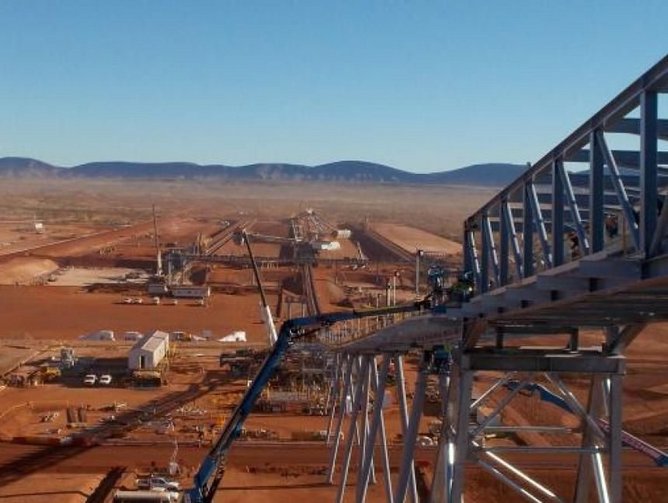 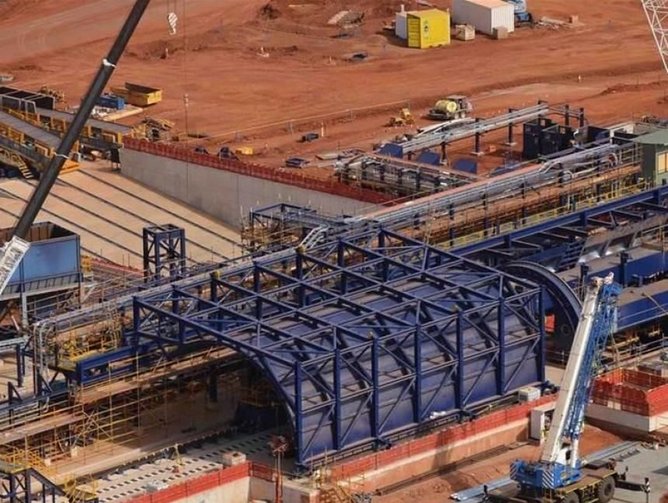